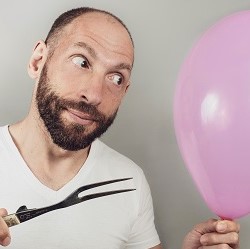 Adam Bloom is one of Britain’s most inventive comedians. He has performed sell-out solo shows at the ‘96, ’97, ’98, ’99, ’01, ’04 & ’07 Edinburgh Festivals as well as performing a sell-out tour of Britain. He has also sold out theatres at festivals in Melbourne, Sydney, Auckland, Wellington & Cape Town. In July ’13, Adam made his fifth appearance at ‘Just For Laughs’ in Montreal, including being part of 2004 ‘Just For Laughs Comedy Tour’, playing to 42,000 people in 17 cities across Canada. He has also written three series of ‘The Problem with Adam Bloom’ for BBC Radio 4.

“A light-speed wit, focussed over years at the pinnacle of stand-up”

“Bloom is perhaps the perfect comedian”

“He makes me laugh out-loud, I can’t wait to see him live”
Sir Ian McKellen

“For pure stand-up, firing out well-written lines and riffing with an audience, Bloom remains in the highest division”
The Scotsman

“He’s been one of my favourite stand-ups for about ten years. Bloom not only has meticulous, brilliant lines, but also an intense and fragile honesty”
Ricky Gervais