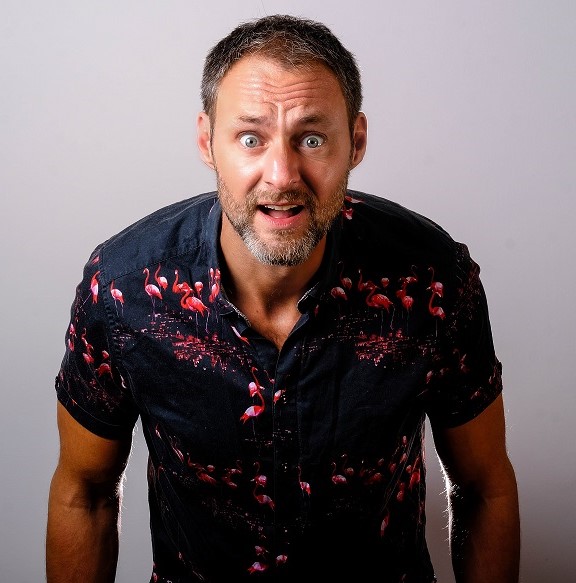 Scottish comedian Leo Kearse is part of the new wave of raw, bold, American-inspired comedians taking the big UK clubs by storm. His “Extinction Rebellion” video slamming woke lefties went viral, selling out shows in the UK. Meanwhile, Leo’s popularity abroad is rocketing, with 2019 seeing him perform in 20 countries. Among various credits, Kearse has written for BBC shows including Breaking The News, Mock The Week and The Mash Report. Leo played Mick Fleetwood in the ITV drama Breaking The Band: Fleetwood Mac.   Leo is also the co-creator of sell-out show Hate ‘n’ Live, which has improvising comedians hating on audience suggestions – Whose Line Is It Anyway? meets Room 101.

“Genuinely thought-provoking…hugely entertaining….a warm and personal show” ★★★★ THE SCOTSMAN
“A triumphant hour of outrageous and dark jokes, not pushing but gleefully running straight through the boundaries of taste and acceptability in today’s “woke” culture” – BRITISH COMEDY GUIDE RECOMMENDED SHOW
“Kearse is seriously good. Quick, funny, smart and to the point…hilarious” – KATE COPSTICK
“A giant of the art” – STEVE BENNETT, CHORTLE
“Rampantly self-interested, prone to generalisations and stereotypes, and with a penchant for punching down rather than up…the audience were roaring with laughter” – ★★★★ One4Review.co.uk
“The fact he gets belly laughs out of global warming, self-identification and the unequal distribution of white privilege does not make him a racist, transphobic monster, just a very good comic” ★★★★ THE SCOTSMAN
“Very funny, very dirty, occasionally shocking, but edgily likeable and happily endearing, eliciting the guilty pleasure of laughter from a wide-eyed audience” – ★★★★ THE LIST
“Very tall and very funny… such energy and aplomb that the audience is left powerless to resist… one of the most enjoyable shows of the Fringe” – THREE WEEKS ★★★★
“A personal and entertaining comedy hour” – ★★★★ LONDON THEATRE
“He churns out the gags, provoking a steady stream of laughs in his tight set, which strides purposefully between topics with muscular, efficient lines on each. Kearse was both an audience and judges’ favourite, and the deserved winner” – Steve Bennett, Chortle
“Bad…genuinely offensive…a traumatic experience for some audience members” – The National Student