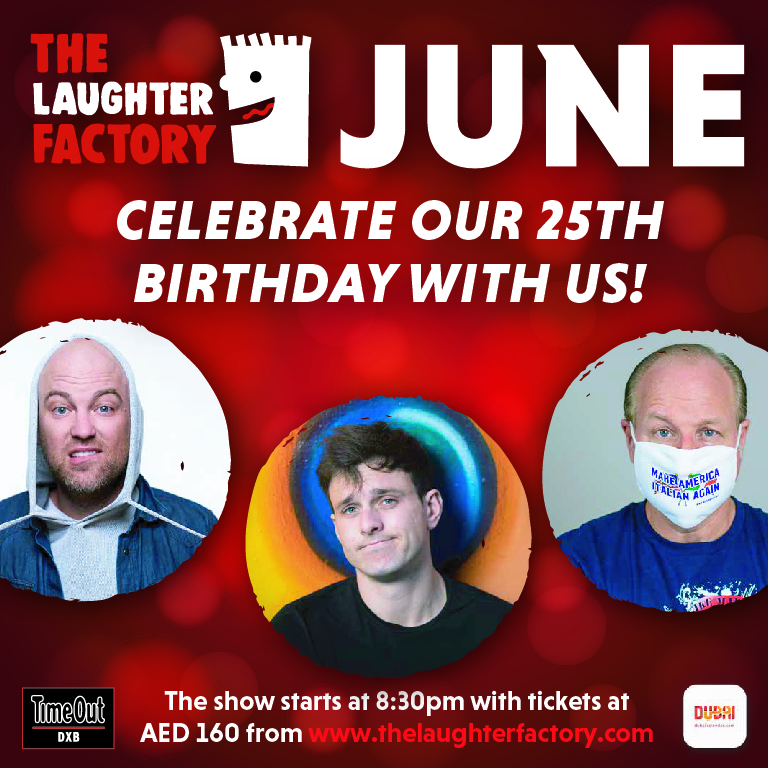 The Laughter Factory comedy club has been keeping comedy fans in the Gulf deliriously happy for a whopping 25 years. The club continues to grow by producing funnier, more global shows that attract a younger and more diverse audience.

In June 1996 Dubai’s entertainment scene consisted mainly of musical duos sporting mullets and murdering ‘Hotel California’ in scruffy bars. Gail Clough was a DJ and Duncan Jones was a drummer (in a scruffy bar). They both wanted to watch some live comedy. Hence, the Laughter Factory was born.

Their original home was at the Hyatt Regency in Deira. It was a unique time in comedy history. Up and coming comedy voices were starting to explode onto the UK circuit, names such as Russell Peters, Frankie Boyle, Lee Mack and Dara O’Briain arrived in the 90s. The millennium brought us Michael McIntryre, Jack Whitehall, Kevin Bridges, Mickey Flanagan, Sarah Millican and Jason Manford.  A huge portion of the successful comics on UK TV today can trace part of their roots back to our tiny much-loved club in the desert.

Owner Gail Clough says, “The idea that a comic has an authentic voice, rather than just telling jokes is one of major reasons that the Laughter Factory has thrived for 25 years. Life is an ever-changing picture. The Laughter Factory wants its comedy to reflect this.

We are conscious of creating a space where established comics keep mentoring the younger acts. This is what keeps the circuit alive. We want somewhere comedians and comedy fans can come together and enjoy each other.

Being based in Dubai has meant that we are not part of a big comedy scene  unlike the UK, Canada and US. This has been in some ways beneficial. We don’t get caught up with the latest comedy fads. We focus totally on our audiences and what makes them laugh”.

To celebrate their 25th anniversary the Laughter Factory is bringing the 2015 winner of  the highly acclaimed USA  ‘Bob Hope Comedy Award’ Mike Marino, this will be a unique and rare treat for Dubai comedy fans.

Next on the bill, Mike Rice has to be one of the most popular Irish comics in the US today. Spending several years playing some of the best clubs in the states, Mike has both the charm and storytelling abilities of Irish stand-up coupled with the slick performance style that is perfectly crafted in the US.

Finally, back by popular demand one of America’s much sought after headliners, Corey Michaelis is one of our most popular acts. Corey had an epic run of shows a few years back. We cannot wait to hear about his latest escapades.

Come, join us and let us celebrate 25 years of making not just you but ourselves deliriously happy.

When & Where:
The Laughter Factory, June 2021 tour dates

According to a bunch of girls he’s dated, Cory Michaelis will shock you with some of the things he says but do it in a way that you’ll still find him charming. He talks about his high school sweetheart and former wife, his new relationships, and his unique day job and co-workers in a way that he wouldn’t want any of them to hear. Cory just recorded his first comedy special “Collage Graduate” – 45 minutes of squeaky clean material – in Provo, Utah at Dry Bar Comedy and released his first album “The Collage Dropout” that reached #2 on both the Billboard and iTunes charts. He headlines numerous clubs in the US and Canada, is a regular at Brad Garrett’s Comedy Club at the MGM Grand Casino in Las Vegas, and headlines other casinos, colleges, and weird bars all over the world. He has been invited to the Bridgetown Comedy Festival in Portland, Oregon, the Limestone Comedy Festival in Bloomington, Indiana, and headlined the Idaho Laugh Fest in Boise. He didn’t win the 2012 Seattle International Comedy Competition (SICC) or the 2016 Laughing Devil Comedy Festival in New York City (finals) but he took another crack at the SICC and made the finals. Louie Anderson – who he has opened for in Vegas multiple times and has served as a mentor – says “you’re funny, but why do you always make fun of Roze?” – come see what Louie’s talking about.

Mike began stand-up comedy in Chicago where within two years he worked regularly at the most prestigious clubs in the city including The Laugh Factory. He has since returned home because his mother made him, and has been quickly rising in the Irish, and European scene, playing regularly in major clubs in Dublin, and London where he won the King Gong at the Comedy Store in 2019, the same year he performed stand up twice on Irish national television. Michael brought his first solo show “The Best Boy in Ireland” to the Edinburgh fringe festival 2019, in what was a sold out run, and performed that same show to sold out rooms at the Perth Fringe Festival in 2019.

Affectionately known to millions of his fans worldwide as New Jersey’s Bad Boy – is one of the most loved comedians of our time. He has performed in every major comedy club, theatre, casino and event center from New York to Los Angeles and around the world. Mike has also shared the stage with some of the biggest names in the business.

Mike Marino was born in Jersey City, New Jersey. He entered the entertainment industry at an early age and has studied at some of the most prestigious acting schools in New York, the Herbert Berghof Studio and the American Academy of Dramatic Arts. Mike has appeared in over 200 national television commercials, including many endorsements and has received a Best Actor Clio Award Nomination. He has acted in many Prime Time soaps and television shows including: As the World Turns, One Life to Live, Becker, Nikki, Frasier and Party of Five. His film credits include Crooks, Pizza with Bullets, Hangin’ in Hedo and Steven King’s Lucky Quarter and Criticsized.

Adding to his great success in film, theatre, commercials and soaps, Mike Marino began touring the world performing and selling out at countless clubs, theatres and casinos. His stand-up material ranges from cutting edge observations of everyday life to his Italian family roots; which recently spun into a T.V. pilot called “Re-Constructing Jersey”. His comedic style has landed him guest appearances on The Tonight Show as a regular sketch player, The Martin Short Show, Canada’s Comedy TV, The Boomer Show, Wild Pitch, and Hand Held Comedy Radio. A clip of Mike’s appearance on Byran Allen’s Comics Unleashed earned him over 7 million views (and counting), which has led to his current web series “Marino 2016” – an original comedy based on Mike’s road to the White House and wise guy attempt to become the first Italian American President of the United States.

In the Fall of 2008, Mike Marino was inducted into the New Jersey Comedy Hall of Fame and in 2015 he won the USO Bob Hope Comedy Award for his many performances for the military. Mike has also been featured on numerous talk shows and has hosted some of the most prestigious award shows including The Beverly Hills Film Awards, Hoboken Film Festival, Montreal Quintus Film Festival and countless corporate events. Mike has been featured in the Just For Laughs Comedy Festival in Montreal, Canada, seven years in a row.

Mike Marino has a tongue like a razor and a heart of gold. He has the incredible ability to perform in any arena, big or small, and can cater his material for all audiences, from strictly clean to down and dirty. He has performed in hundreds of corporate functions for companies including AT&T, United Airlines, American Express, Paul Mitchell, IBM, Wella, Merrill Lynch, Sebastian Intl., Toyota, L.A.S.D., N.J. Asphalt Assoc., The City of Hope, OSIA, and the LAPD. Mike Has performed for numerous charities including Aids Project – LA, Haven House, Team earthworks, and the Eric Davis Cancer Fund. When Marino is not performing, he enjoys traveling and spending time with his family on the East Coast.

www.anchor.fm/mikemarinolive   Listen to my Podcast