The Laughter Factory Supper club brings you ‘It’s time to test Positive, for Happiness’ tour Brought to you by DSS 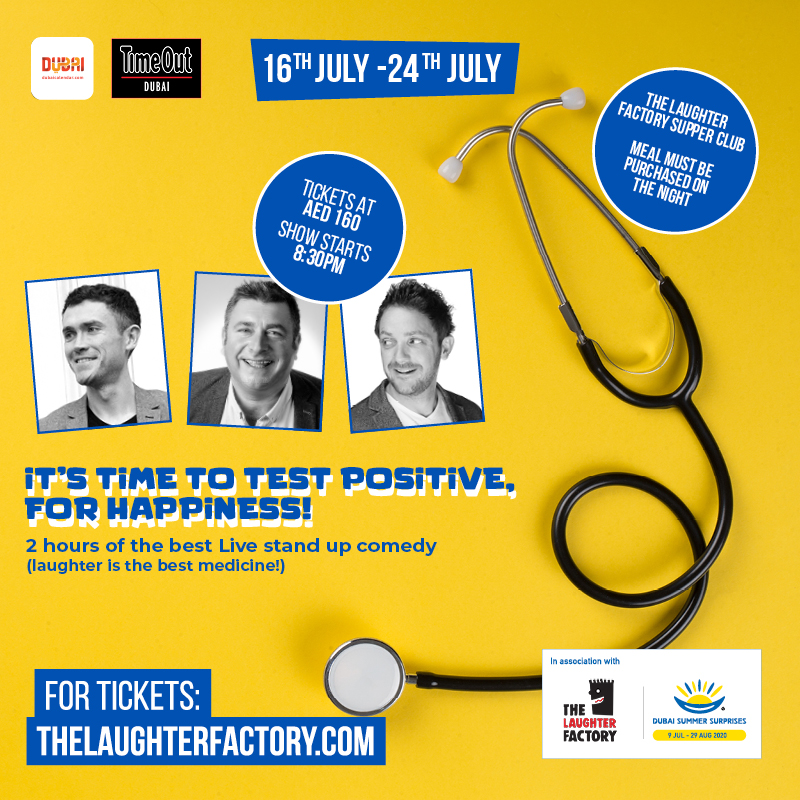 Unless you are Jeff Bezos, I think we can quite safely say, ‘We have never been more in need of a good laugh!’. During the lockdown, the Laughter Factory has been working tirelessly to punch above their weight and sign some of the best talent in the comedy world.

Making his debut in the sandpit ‘Dublin’s Funniest Comedian’ Danny O’Brien, not only opened for Bill Burr, but smashed the granny, out of the night. All we can say is ‘stadiums are calling!

Next on the bill we invite storytelling comic Nick Page to titillate us.  There’s a moment where the audience asks themselves ‘I wonder if that’s true?’. With Nick Page there is more doubt, because the stories are so outlandish, and yet at the same time there’s the sure knowledge that every story is true, and that his is a life lived laughing from disaster to disaster.

He’s definitely one of those people you shouldn’t like but do. He has an enviable gag rate, with each story and routine filled with set ups, call backs and devastating punchlines. His stories are unique, yet relate to everyone.

Finally we have to ask the question. Can Dubai handle dark, intense, intellectual humour?

How dare you even ask! Designer handbags at dawn we say!

So we are welcoming Irish times columnist Peter Flanagan. A bit of genius is what we have all been waiting for especially when it is distilled with some perfectly crafted jokes. This brilliantly funny man will shake a few cobwebs off our dusty minds and re introduce us to our former carefree self, Table service with dinner and drinks.

Main course must be paid for on the night.

Tickets must be purchased on www.thelaughterfactory.com
Compulsory meal must be paid for by credit card at the venue. Please call Gail 05058786728 to book your table after you have bought all of your show  tickets.
Main course from 35 AED
Show starts 8:30pm

This summer season, the 23rd edition of Dubai Summer Surprises (DSS) features a multitude of exclusively held events hosted across Dubai. The Laughter Factory Supper Club part of the seven-week extravaganza which offers exciting events, promotions and sales ranging from 25 per cent to 90 per cent off, unlimited entertainment, F&B offers and family fun.

With storytelling comics there’s a moment where the audience asks themselves ‘I wonder if that’s true?’. With Nick there is more doubt, because the stories are so outlandish, and yet at the same time there’s the sure knowledge that every story is true, and that his is a life lived laughing from disaster to disaster.

He’s definitely one of those people you shouldn’t like but do. He has an enviable gag rate, with each story and routine filled with  set ups, call backs and devastating punchlines. His stories are unique, yet relate to everyone. Everyone has felt frustrated by the legal system, nobody else has tried to go to prison to prove a point. Everyone watches daytime TV, nobody else has been sacked from it for an incident involving a Russian call girl and an antique rocking horse.

Nick placed second at ‘The English Comedian of the Year’ 2016. His debut Edinburgh Festival show had sell-out performances, critical acclaim and a host of 4 star reviews. He is in enormous demand in comedy clubs throughout the UK, as a headline act and MC, and has been for the last 12 years.

Since arriving in London in 2016, he’s quickly become one of the most in-demand acts on the UK comedy circuit. His razor-sharp material and polished delivery has brought him to the top comedy clubs and festivals around the world, from Dublin’s Vodafone Comedy Festival to London’s world famous Comedy Store.

A regular columnist for the Irish Times and the Journal, he is known for his whip-smart writing and his searing, incisive takes on Irish and British politics. He has also written material for BBC and Comedy Central.

“Peter is a natural…definitely one to watch!” – The Laughter Lounge