The Laughter Factory’s A Truly Memorable, End of season Party? 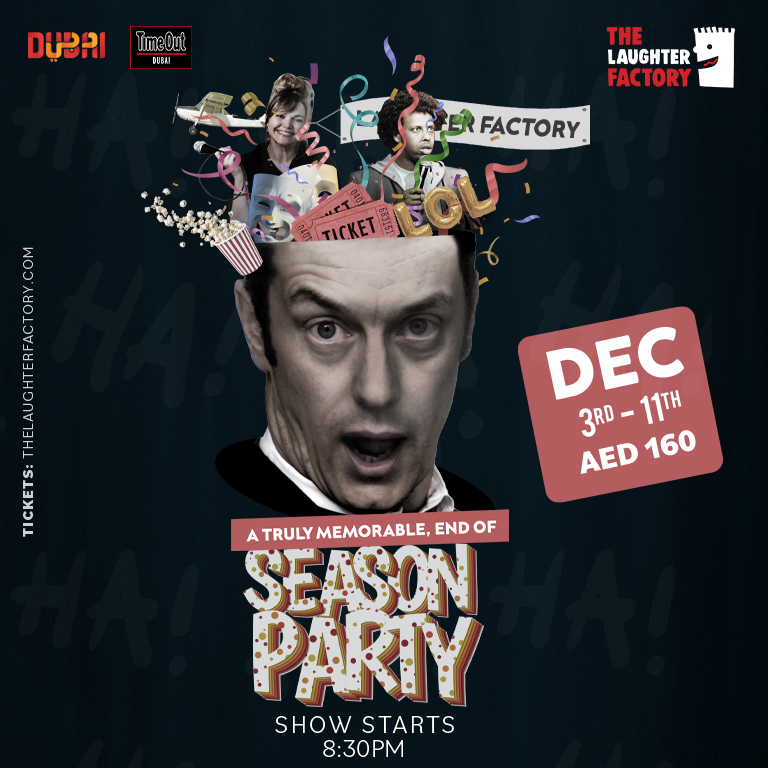 The Laughter Factory’s end of season party is ideal for groups of friends and office parties alike.

This outrageous fun night out, boasts three of the funniest people from shows such as’ Live At The Apollo’, ‘Mock the Week’ and Michael McIntryes Road Show

Headlining the tour, Paul Tonkinson has long upheld his esteemed reputation, as one of the finest stand-ups the UK has to offer. With a unique and distinctive style, Tonkinson is noted for his effervescent physicality and skillful impressions, which bring alive exuberant, tender comic reflections on love, family and the day-to-day idiosyncrasies of 21st century living.

Making her debut at The Laughter Factory. Naomi Cooper is simply funny. Described as “A comedy badass”

“A delightfully joyful demeanour that fills the stage with mischievous glee.” – Chortle.

Naomi Cooper is someone to look forward to seeing in a small club, before she’s playing arenas.

Finally, we have BBC sketch show star Prince Abdi, who has also wowed audiences on Comedy Central’s ‘The World Stands Up’. This Somalian born British stand up draws on his migrant background to create a uniquely hilarious style of storytelling.

Such a diverse bill, will ensure everyone has something to laugh about.

When & Where:
The Laughter Factory, December 2020 tour dates

A special room rate for 2 people at AED 300 including all taxes and breakfast.

Should you wish to eat before the show all pre show tables MUST BE pre-booked in LAH LAH and must be vacated by 8:15pm.(04-5191111). Your ticket does not automatically guarantee you a table in LAH LAH prior to the show. LAH LAH will be at capacity so book early!
The show is in ‘The Box’ (opposite LAH LAH)

Call 0508786728 for details.
Show tickets must be purchased on www.thelaughterfactory.com
Ticket at AED 160 including VAT

A feel good comedian, he draws in the audience with great stories and hilarious jokes.

As well as the UK, Prince regularly performs all over the world, including in countries such as the USA, Canada, Turkey, Holland, Northern Ireland and Kenya.

Prince has just finished the Cape Town international comedy festival performing to over 25, 000 people in 4 weeks.

Having written and starred in his own TV sketch show for the BBC, Prince has also appeared on Comedy Central, BBC, ITV and Channel 4.

Naomi Cooper is a hugely talented rising star from the UK. She supported Curb Your Enthusiasm’s Jeff Garlin for his extended sold-out run at the Soho Theatre in London, and also performed with him at the Hollywood Improv and the Laugh Factory in Los Angeles. This year Naomi was a finalist in the 2020 Funny Women Awards, streamed live from the Comedy Store in London.

“A delightfully joyful demeanour that fills the stage with mischievous glee.” – Chortle

The Laughter Factory is the Middle East’s longest-running comedy night, proudly making the GCC laugh since 1997. Thanks to a longstanding partnership with the UK’s Comedy Store, The Laughter Factory hosts a fresh bill of three different professional comedians every month, many already familiar stars of the screen on hit UK TV shows.

The Laughter Factory’s commitment to comedy has been recognized by numerous publications, winning several accolades over its two-decade history, including a several ‘Best Comedy’ and the ‘Lifetime Achievement’ awards from Time Out Dubai and Abu Dhabi.