The Laughter Factory’s ‘After Every Bitter! There’s A Sweet!’ Tour 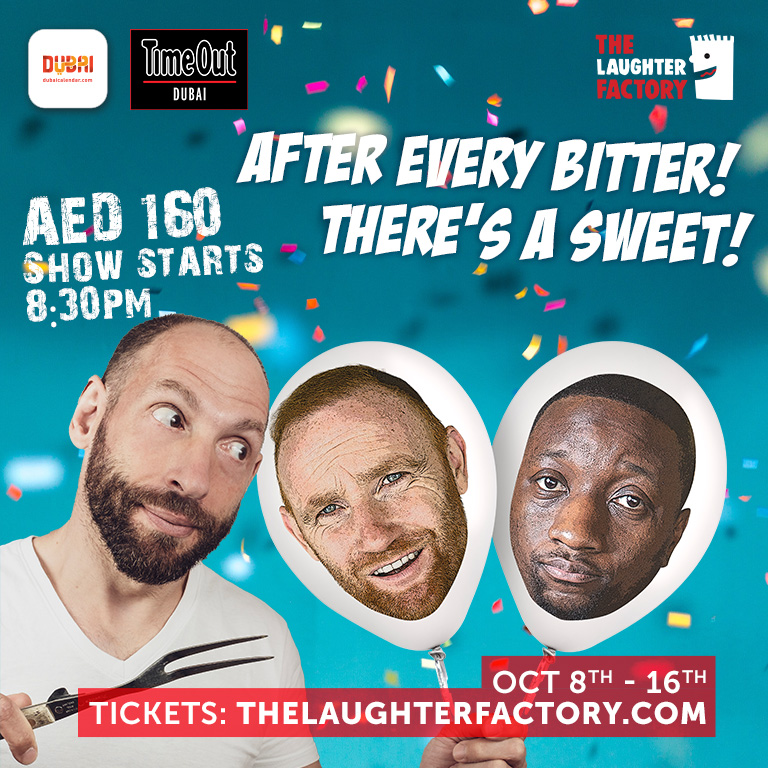 After diving into life’s abyss and coming up laughing, this month’s tour represents the sheer folly and absurdity of human existence. At the Laughter Factory we firmly believe that live comedy is the best coping mechanism we have against the dark side of life.

So the time has come; to shine some light and laughter on those of us who not only want some safe fun but know exactly where to find it.

When it comes to our first act Adam Bloom, Ricky Gervais, tells us everything that we need to know, “He’s been one of my favorite stand-ups for about ten years. Bloom not only has meticulous, brilliant lines, but also an intense and fragile honesty”.

Bloomy, as we like to call him, also holds the Best Stand–up winner from Time Out London and Chortle awards ‘Best Comic’. Basically, he has more coveted accolades, than Victoria Beckham has handbags.
Next, making his debut in the UAE, Babatunde Aleshe was selected to appear alongside Dave Chapelle in his live showcase The Process as well as being part of Celebrity Gogglebox for Channel 4.

Being of Nigerian heritage and married to a Jamaican woman, Babatunde presents a hilariously fresh perspective on mixed marriage.

Finally, described by the Irish Times as having “a joke every 30 seconds”, his rapid fire delivery regularly has audiences crying with laughter. Rory O’Hanlon is a regular face on Irish TV and it is easy to see why.

So don’t miss three of the world finest gag merchants, peddling naughty jokes to the loveliest comedy audience you could ever hope to spend time with.

When & Where:
The Laughter Factory, October 2020 tour dates

A special room rate for 2 people at AED 300 including all taxes and breakfast.

A special room rate for 2 people at AED 310 including all taxes and breakfast
Should you wish to eat before the show all pre show tables MUST BE pre-booked in LAH LAH and must be vacated by 8:15pm.(04-5191111). Your ticket does not automatically guarantee you a table in LAH LAH prior to the show. LAH LAH will be at capacity so book early!
The show is in ‘The Box’ (opposite LAH LAH)


Call 0508786728 for details.
Show tickets must be purchased on www.thelaughterfactory.com
Ticket at AED 160 including VAT
Show starts 8:30pm

Fast rising star Babatunde Aléshé is one of the biggest names on the Black British comedy circuit.

Being of Nigerian heritage, married to a Jamaican and a passionate all-out family man, his stand up presents a hilariously fresh perspective. Each powerhouse performance oozes charisma and showcases impeccable stagecraft and comic timing.

Whilst regularly performing for thousands at iconic venues such as the O2 and Hackney Empire, Babatunde has also already authored provocative factual content drawing on his own powerful story of growing up poor in inner city London (Trap Town, London Live). An experienced actor, he has appeared in an extensive list of TV shows including Waking the Dead and films including Pelican Blood and The Naked Poet, alongside cutting-edge theatre such as Iya Ilé (Soho Theatre) and Requiem for Tomorrow (Shaw Theatre).

In 2019 he won the Amused Moose National New Comic Award and was selected to appear alongside Dave Chapelle in his live showcase The Process.

In 2020 he appeared as part of the new cast for Celebrity Gogglebox for Channel 4, representing the show at the Bafta’s and will support Mo Gilligan on his huge UK and European tour for 2021.

video clips we can use on Facebook (we edit them to 30 seconds so a whole routine is never used)  https://youtu.be/QV_Fs36jEQk

Having started his career in Dublin, award winning Irish stand-up comedian and actor Rory O’ Hanlon is a firm favourite at comedy clubs across the UK and Ireland. Described by Chortle as having “presence, poise and timing” and by the Irish Times as having “a joke every 30 seconds”, his rapid fire delivery regularly has audiences crying with laughter.

A regular face on Irish TV, Rory has been seen on RTE’s New Comedy Awards, Republic of Telly and alongside Des Bishop in Under the Influence. He is also a veteran of stage performing with 7 consecutive solo shows at Edinburgh Fringe, including performing at in The Stand’s ‘Best of Irish’ show, as well as recent appearances at both Glasgow and Cardiff Comedy Festivals.

Rory is also known internationally, having performed all over the world, from Moscow to Berlin, Monte Carlo to Brussels, and many places in between. 2016 will see Rory heading off to Australia, where he will be performing at the prestigious Perth Comedy Festival.

In addition to performing stand-up, Rory is also a prolific writer, having contributed to the Irish Post, Chortle and Hot Press magazine, and has recently starred in the short film Spring Clean, which reached the final of the 2013 Virgin Short Film Awards

Adam Bloom is one of Britain’s most inventive comedians. He has performed sell-out solo shows at the ‘96, ’97, ’98, ’99, ’01, ’04 & ’07 Edinburgh Festivals as well as performing a sell-out tour of Britain. He has also sold out theatres at festivals in Melbourne, Sydney, Auckland, Wellington & Cape Town. In July ’13, Adam made his fifth appearance at ‘Just For Laughs’ in Montreal, including being part of 2004 ‘Just For Laughs Comedy Tour’, playing to 42,000 people in 17 cities across Canada. He has also written three series of ‘The Problem with Adam Bloom’ for BBC Radio 4.

“A light-speed wit, focussed over years at the pinnacle of stand-up”

“Bloom is perhaps the perfect comedian”

“He makes me laugh out-loud, I can’t wait to see him live”
Sir Ian McKellen

“For pure stand-up, firing out well-written lines and riffing with an audience, Bloom remains in the highest division”
The Scotsman

“He’s been one of my favourite stand-ups for about ten years. Bloom not only has meticulous, brilliant lines, but also an intense and fragile honesty”
Ricky Gervais