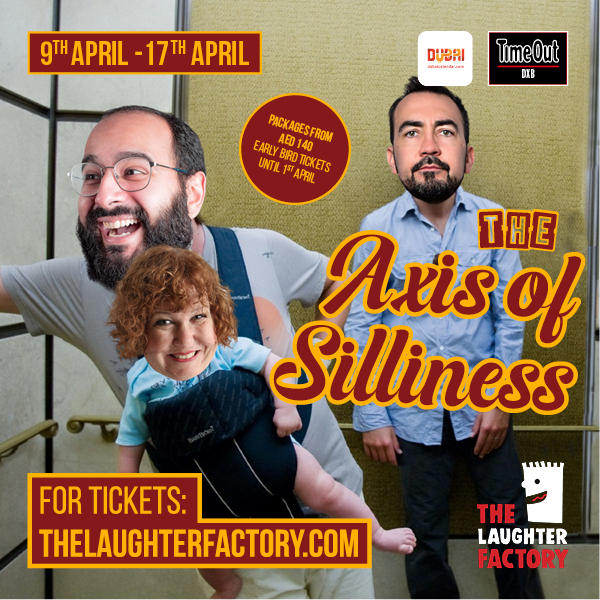 Once again it’s time to hold on tight, as the Laughter Factory comedy club is about to enter the joyous topsy-turvy world of a 3 foot 6 adult.

Irrespective of size, Tanyalee Davis is indisputably one of the best American stand-up comics touring the globe. This non-stop giggle machine makes Joan Rivers look positively pedestrian. Her mantra is ‘be brave, be very brave’.

Making his debut in the Middle East. Stephen Carlin, is hailed by Stewart Lee and Stephen Merchant as one of the best comedians performing at the Edinburgh Fringe. His sell out tour ‘Pickwickian’ has gained critical acclaim and a growing fan base with his original, insightful material and his accomplished delivery. He is increasingly expanding his following on the international comedy scene performing this year across Asia, Europe and of course joining the Laughter Factory in the Middle East.

Finally, Omid Singh will take you on a journey of laughs through his half Iranian, half Indian heritage. This former UAE resident has established himself as one of America’s top multicultural voices.

This seriously impressive act will tear the roof off his Middle East tour.

With such a diverse line up, prepare to expect, the unexpected.

For serious comedy fans that like to meet the acts and discuss the show. There is a wonderfully sociable after party where like-minded people with a good sense of humor can get to know each other.

Early Bird Tickets at AED 140 available until and including 1st April.

Tanyalee Davis is a 3 foot 6 inch standup comedian form Canada who is now headlining at comedy clubs, colleges, and comedy festivals throughout the UK, and the world with her own unique perspective and somewhat racy brand of comedy.  In January 2011, Tanyalee performed her ONE WOMAN SHOW, 4 nights a week for 6 months, just off the Las Vegas strip.

Since arriving in the UK back in 2013 Tanyalee has stormed the UK comedy scene earning her appearances on prestigious comedy shows such as Live At The Apollo, The Last Leg & The John Bishop Show. Tanyalee also supported Frankie Boyle on his 2012 UK Tour

Not just content on being a comedian Tanyalee has also appeared in multiple movies including El Matador, For Da Love Of Money & Austin Powers 3: Goldmember. Tanyalee is also part of Abnormally Funny People, an ensemble show, performing throughout the United Kingdom. In 2007 Tanyalee premiered her first one woman show called “Little Do They Know” at the Edinburgh Fringe Festival where she received 4 star reviews.

The US Comedy Invasion – Edinburgh Fringe- 2003

‘A captivating piece of comedy” – The Edinburgh Reporter