The Laughter Factory’s ‘Best of the Fest’ tour’ 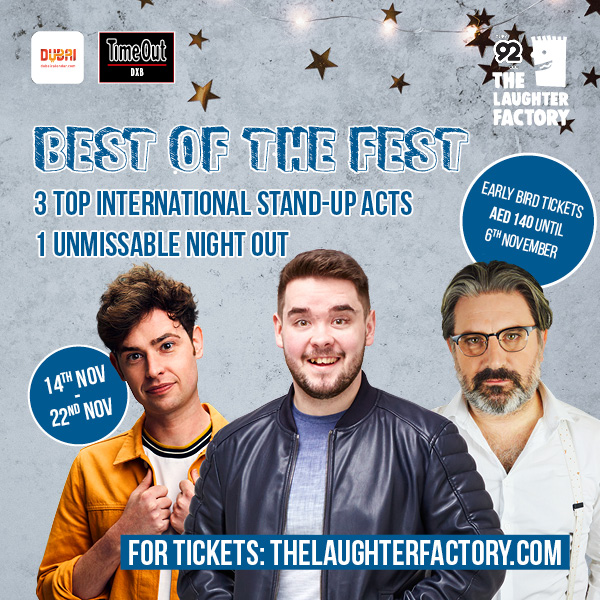 The Laughter Factory’s  ‘Best of the Fest’ tour’

Welcome Ladies and Gentlemen to The Laughter Factory! Prepare yourselves for a night of flamboyant, hysterical and outrageous live comedy that will knock your socks off!

Making his debut appearance in the Middle East, Brennan Reece has zoomed like a rocket, from a North of England council estate, to star of ‘Live at the Apollo’. This ridiculously funny comic, is fiercely proud of his working class background and gives us plenty of laughs about it. Despite his down to earth demeanor, this wordsmith from the North has already sold out, 3 UK tours.

Back by popular demand, award-winning comedian Rich Wilson is one of the UK’s finest comedians and won the prestigious New Zealand Comedy Festival Award for “Best International Act.”

Rich has been “winning over audiences in seconds” at all the major UK comedy clubs, The Comedy Store, Glee Club and The Stand but to name a few. Described as, “Highly entertaining” by Time Out London. This firecracker of a comic always delivers a hugely enjoyable set

Finally we are delighted to see the return of one of the most exciting, young comics in the world; Adam Rowe has risen from a prodigious newcomer to an international headline act.

His phenomenal ad-libbing ability make each of his performances unique, gloriously unpredictable and, most importantly, always hilarious.

Early Bird Tickets at AED 140 available until and including 6th November.

He has performed all over the world, including the Melbourne International Comedy Festival, supported Joe Lycett, Rob Brydon, Jason Manford and Nick Offerman as part of their UK tours, and has got three of his own sold out UK tours under his belt too. He even has over 6 million views on Youtube/Facebook, how modern.

Rich has been “winning over audiences in seconds” at all the major UK comedy clubs (Jongleurs, The Comedy Store, The Comedy Cafe, Big Night Out), has entertained audiences in New York, Las Vegas and for 5 years was part of the

CSE, Entertaining for the troops in the Middle East.

He has also performed sell out shows at tonnes of major comedy festivals including Perth Fringe, Melbourne International, Edinburgh Fringe and of course is a firm favourite at the New Zealand Comedy Festival.

Rich was also part of a show that got nominated for the “Best Show” at the Perth International Comedy Festival in 2016 with “Best Of British” and “The Comedy Ashes.”

With his stylish delivery, Rich has the unique ability to be able to tame the toughest audiences in the country with his commanding presence and impeccable timing.

Widely regarded as one of the most exciting, young comics in the world; Adam Rowe has risen from a prodigious newcomer to an international headline act, since his debut in 2010. He is one of the most sought after acts for all of The UK’s biggest comedy clubs & festivals, whilst he has also performed in & headlined clubs in The Middle East & The United States.

His natural, laid back persona combined with brutally honest, opinionated stand-up and his phenomenal ad-libbing ability make each of his performances unique, gloriously unpredictable and, most importantly, always hilarious.

Adam has opened for Andrew Schulz, Jason Manford & was hand-picked to support Bill Burr on the UK leg of his 2019 tour “50”, including two nights at the iconic Royal Albert Hall in London. He’s completed two solo tours; ‘Unbearable’ (2017) and ‘Undeniable’ (2018), both of which sold out dates all over the UK and in 2019 he will take his third solo tour ‘Pinnacle’ on the road, before taping this show as an hour-long special in 2020.

February 2019 saw Adam make his TV debut, on The Stand-Up Sketch Show (ITV2). Most of his stand-up has been viewed online, with a staggering 50 million views racked up across various platforms  such as his YouTube channel, his social media pages and viral-sharing pages such as ‘LadBible’, ‘UniLad’ and ‘Live At Hot Water Comedy Club’.