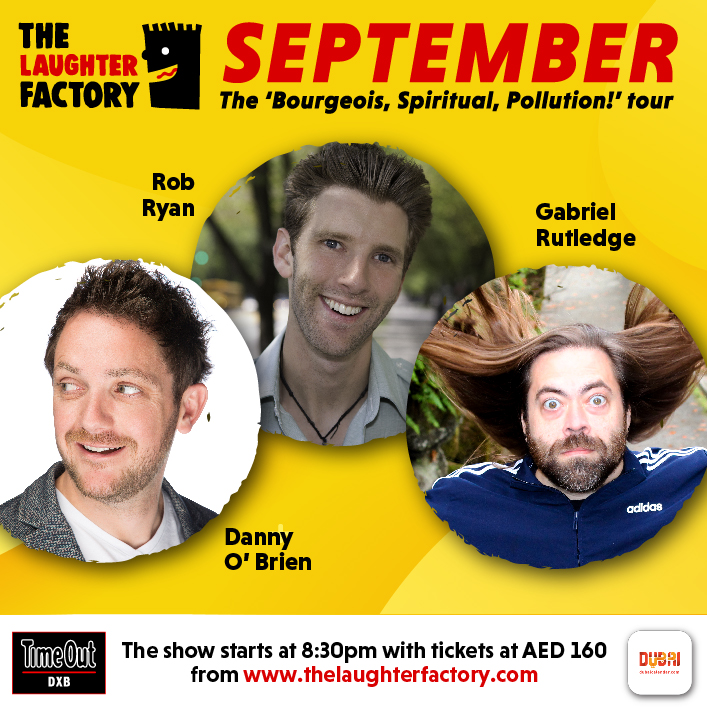 Chairman Mao used the term ‘Bourgeois, spiritual, pollution’ to describe anything that we would consider to be ‘A bit of fun!’.

It’s a good job the Laughter Factory wasn’t in China during the 1960s. We would of been the subject of great scrutiny in Mao’s ‘Red Book.’ We are guessing that a whole chapter could have been dedicated to the harmful effects that 2 hours of nonstop laughter could do to society. Thankfully times have changed.

Laughter is now considered to be one of the best things we humans can do with each other and for each other. Making sure we get our dose of the right type of pollution this month we have multi-winning comic Gabriel Rutledge whose recent album debuted at #1 0n the iTunes comedy charts.

Another newcomer to the Laughter Factory is Rob Ryan. Audiences love that Rob not only shares the thoughts parading through his mind but he shows them, with vivid characters and spot on delivery. Rob’s intelligent witticisms combined with his infectious story telling make his shows not only entertaining but unforgettable. To tell you any more though would be giving it away.

Finally, we are delighted that the busiest comic during lockdown is back with us. Danny O’Brien was described perfectly by Glam Adelaide.  “Danny is everything you could want from an Irish comedian. A born storyteller who knows how to get the crowd roaring with laughter”-

When & Where:
The Laughter Factory, September 2021 tour dates

A past winner of both the Seattle International Comedy Competition and The Laughing Skull Comedy Festival in Atlanta, Gabriel has made numerous television appearances including Comedy Central’s Live at Gotham, Nickelodeon’s Nickmom Night Out, Laughs on FOX, and Inside Joke with Asif Ali streaming on Amazon Prime Video.

Gabriel has released 5 albums including his most recent “Good Luck in Court” which debuted at #1 on the iTunes comedy charts. He is also the author of the book “Happiness Isn’t Funny”.

Winner of the “Boston Comedy Festival”, Winner of the “Last Comix Standing” competition, and Finalist in “Caroline’s March Madness” Rob Ryan has proven to at least be funnier than his peers in competitions.

He’s performed on “Laughs” on FOX and “Gotham Comedy Live” on AXS TV. His debut album “Non-Alcoholic” has received rave reviews and is available on streaming services right now as you read.

Audiences love that Rob not only shares the thoughts parading through his mind but he shows them, with vivid characters and spot on delivery. Rob’s intelligent witticisms combined with his infectious story telling make his shows not only entertaining but unforgettable. To tell you any more though would be giving it away.