The Laughter Factory’s ‘Do yourself a favor and laugh more! tour’ 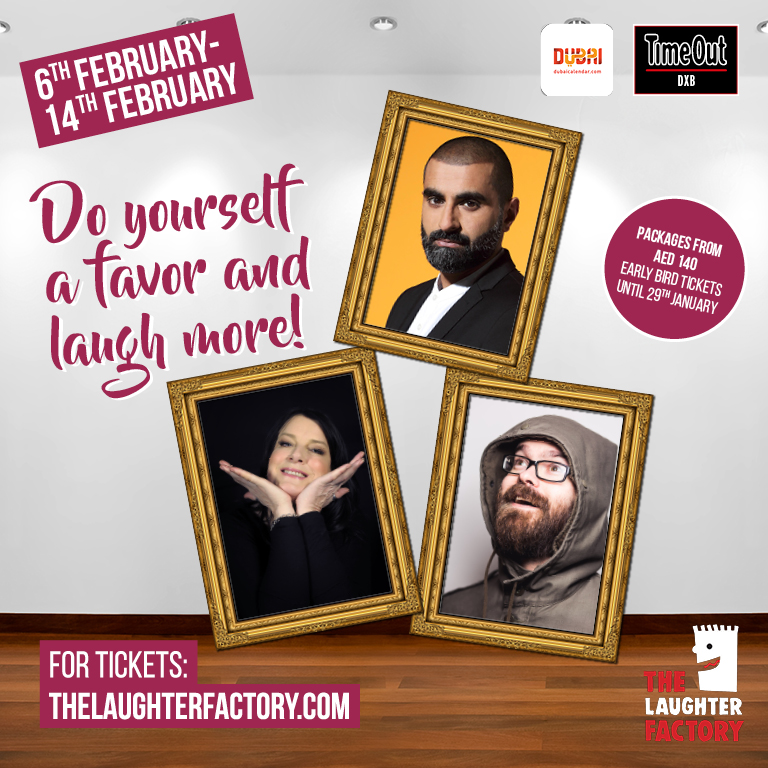 This month’s Laughter Factory is an exciting array of the very best in live stand up.

This evening of chaos, decadence and mischief will be introducing one of the most celebrated rising stars in UK television, Tez Ilyas. This British comic of Pakistani descent is now a regular face on the TV screen. Kevin Hart handpicked Tez to be a part of his revered ‘Live from Montreal’ show. Recommendations don’t get any better than this!

When it comes to Karen Bayley all we can say is ‘Brace yourself!’ This woman raises a fist with one hand and tickles you with the other. The only woman to ever win the prestigious Comedy Store, ‘Gong Show.’ Wickedly funny, punk comedy is the term that springs to mind.

Finally, Chris Betts is the most incredible man that you have probably never heard of. He loves to have a prod at taboo topics they reckon his mind is a curious place, where the philosophical meets the ridiculous.

One of Canada’s most impressive acts, do not miss this chance to blow a few cobwebs off your brain

Early Bird Tickets at AED 140 available until and including 29th January.

Tez Ilyas is one of the most celebrated rising stars in British Comedy.

In 2015 Ilyas achieved phenomenal success with his debut stand up hour TEZ Talks. A sell out run at the Soho Theatre and his own Radio 4 series based on the show followed, with a second series quickly being recommissioned. In 2016, his highly anticipated follow up show Made in Britain went on to sell out every single performance (including extra shows) at the Edinburgh Fringe and gained spectacular critical acclaim, with a smash hit nationwide tour in 2017. His third show Teztify once again delivered a spectacularly powerful, provocative and brilliantly funny hour of topical stand up, delivering to packed out audiences night after night.

Tez has since appeared on Live at The Apollo (BBC Two), The Last Leg (C4), Mock the Week (BBC Two), Live From the BBC(BBC Two), Man Like Mobeen (BBC Three), Live from the Comedy Store (Comedy Central), Kevin Hart’s Live from Montreal(LOL Network), Virtually Famous (E4), The Now Show (BBC Radio 4), starred in both his own Channel 4 comedy Blap Bounty  – whichbecame the second most watched show in the format’s 10 year history  – and fronted his own satirical sketch series The Tez O’Clock Show, to huge critical acclaim.

Known for being both a quick-witted MC and a superb addition to any bill, Chris Betts has received numerous plaudits for his sharp material and relaxed stage presence.

Chris Betts’ mind is a curious place, where the philosophical meets the ridiculous. His shows are a perfect balance of incisive social satire and complete silliness.  He has a style that is equal parts confident, thoughtful, ridiculous and mischievous.

Chris has opened for Tom Green and Rob Schneider and made appearances at comedy festivals all over the world including Edinburgh Festival Fringe, SXSW, Rotterdam Comedy Festival and the Zulu Comedy Festival.

“An enticing prospect, a Canadian who deals in off-kilter thoughts sharpened by the occasional prod at taboo topics.” – The Independent

“A confident style… a glint of steelier edge.” – Chortle

Mirror Top 25 Jokes of the Fringe