The Laughter Factory’s ” Does what it says on the tin!” tour 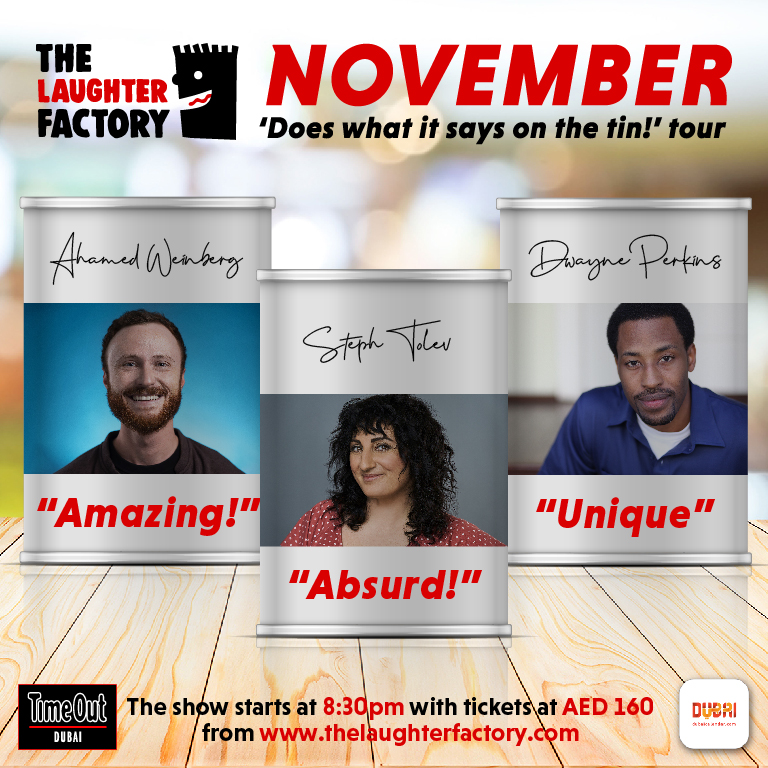 When it comes to live comedy sometimes all we want to do is simply laugh; not think, analyze or learn, just non-stop, hysterical, belly laughs. To ensure that this happens we have three of the best joke mongers in the business, rolling into town.

First up, Brooklyn native, Dwayne Perkins with his show ‘Take Note’ debuted on Netflix to rave reviews and instantly became a fan favorite. Dwayne has earned a spot in today’s elite class of standup comics with several appearances on Comedy Central and Conan.

Next, we have the winner of the Canadian Comedy Award for Best Female stand up. Stev Tolev is undeniably funny. She made her American TV debut on Comedy Central part of Bill Burr’s new show “The Ringers”. Her unique brand of absurd and personal comedy has made her an audience favorite across North America both on stage and on television.

Finally, Ahmad Weinberg was awarded the New Face at the Just For Laughs Festival in Montreal. His newest late-night set for The Late Show w/ Stephen Colbert (CBS) aired summer of 2019. This world-class comedian is deliciously dark and undeniably brilliant.

So, come and join this enjoyably naughty night of comedy, brought to you by acts that you must not miss!

When & Where:
The Laughter Factory, November 2021 tour dates

Ahamed Weinberg is a Los Angeles-based comedian from Philadelphia. He made his late night stand up debut on Late Night w/ Seth Meyers (NBC), is one of TimeOut LA’s Comics to Watch and Vulture’s 20 Comics to Watch and was awarded New Face at the 2016 Just For Laughs Festival in Montreal. Credits include writing, directing, and starring in two seasons of Ahamed’s Ramadan Diaries (Comedy Central Digital), and appearing in Comedy Bang Bang (IFC), The Eric Andre Show (Adult Swim), I Love You, America (Hulu), Comedy Knockout (Tru TV), and Insecure (HBO). His film Lovebirds premiered on Amazon Prime as part of their inaugural FunnyFest short films festival, and his Facebook series Please Understand Me was executive produced by Sarah Silverman and released in June 2018, amassing millions of views. His newest late-night set for The Late Show w/ Stephen Colbert (CBS) aired summer of 2019.

Brooklyn native Dwayne Perkins is a vet in the comedy game. His one hour comedy special: “Dwayne Perkins: Take Note” debuted on Netflix to rave reviews and instantly became a fan favorite. It showcases his unique way of looking at life and his unparalleled ability to convey it in a hilarious manner. Take Note was already in the top 50 Netflix comedy specials of all time only 2 months after being released. Dwayne has earned a spot in today’s elite class of standup comics with several appearances on Comedy Central and Conan. Dwayne is the author of the book, “Hot Chocolate For The Mind,” A collection of humorous essays. Dwayne co-wrote and starred in the feature suspense film “Dying To Kill,” now on Amazon, where he plays a stand-up comic who has to get laughs or die trying. His recurring piece on The Jay Leno Show, “Great White Moments in Black History,” was a viewer favorite. Dwayne’s Comedy Central half hour special was voted one of the top 25 Comedy Central specials of all time. His comedic instincts and acting skills shine through in the indie film Target Audience 9.1. Where he offers much of the comic relief as the funny likable geek.

Steph Tolev is a stand up and sketch comedian from Toronto, Canada currently living in Los Angeles. Her unique brand of absurd and personal comedy has made her an audience favorite across North America both on stage and on television. As a stand up, Steph has done the prestigious Just For Laughs Comedy Festival in Montreal four times, three of which were taped for TV. Steph made her American TV debut on Comedy Central part of Bill Burr’s new show “The Ringers”.  This past year she filmed her first half hour stand up special part of season two of “Unprotected Sets” airing on Epix. She was named one of Vultures “Comics You Should and Will Know” and one of Comedy Central’s “Up Next” comics to watch. She also co-wrote and co-stars in the Comedy Central web series “Steph & Deb” . Steph can also be seen in the Amazon show “Please Understand Me” produced by Sarah Silverman and was featured in season two of “Corporate” on Comedy Central.  Steph has won the Canadian Comedy Award for Best Female Stand up and her latest album “I’m Not Well” was nominated for a Juno Award for “Best Comedy Album of The Year”.

Headshots & Clips can be downloaded from here: