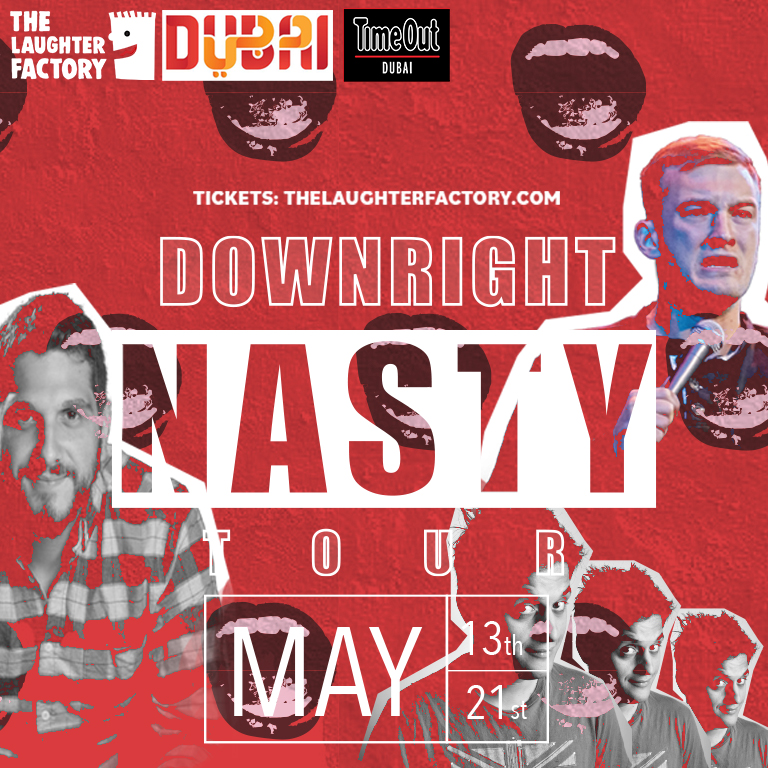 The world has changed irreparably, but there is one thing we all still agree on. There is nothing like a good laugh, especially with other people. It stops us from taking life and ourselves too seriously. Laughter is the shortest distance between people and closing the gap faster than a rocket to Mars, the Laughter Factory has searched the globe to bring three of the world’s most outrageous stand ups, to shake the cobwebs off your tonsils.

Playing a part in the ‘Dubai Comedy Festival’ meant that the Laughter Factory had to use their 25 years in the business, to source some of the best international comedy talent, that the region has ever hosted.

Next on the bill, fantastically funny, George Zach was lured by the idea of living in the country of Hugh Grant, Mr. Bean, and Lady Diana; Due to the family budget, however, instead of living it large in Notting Hill, he ended up in Newcastle Upon-Tyne. Get ready for your organs to burst with laughter, when you hear the tales of his unconventional journey into live stand up.

Our final act in May, hailing from Estonia and just returned from a year in Vancouver, Canada, Ari Matti Mustonen has a bright future ahead of him. With enough on-stage energy, to power a small town and punch lines to match, Ari has been enthralling audiences around the world with stories about life growing up in Eastern Europe.

Forget about your problems. Come and witness the mayhem. The time has come to be happy!!!

When & Where:
The Laughter Factory, May 2021 tour dates

19th May – Zabeel House by Jumeirah, The Greens Dubai

Agostino Zoida is an Italian-American born and raised in Los Angeles, CA, and has written for some hit network television shows such as; “It’s Always Sunny in Philadelphia” “Louie” and “American Horror Story”. Since starting Standup Comedy at the tender age of just 20 years old, he has appeared on Seasons 1 & 2 of “Standup and Deliver” on FuseTV and is a regular on “The Church of What’s Happening Now” with Joey Diaz. Agostino is the host of his own weekly podcast titled “Home Schooled Podcast” in honor of his unique upbringing as a home-schooled child, raised by an Italian-Catholic family with old school values.

Agostino is a staple in the LA comedy scene, performing regularly at The World Famous Comedy Store, The Hollywood Improv, The Ice House & HAHA Comedy Club He is always bringing the funny to the stage with a passionate and unique point of view on Marriage, Family and more. All while maintaining his likability and a Gentleman’s mentality. He has been described as stand-out, very creative, a hilarious storyteller, and a crowd favorite.

George is Greek and moved to Britain at 18 to study Biochemistry lured by the idea of living in the country of Hugh Grant, Mr. Bean, and Lady Diana; Due to the family budget, however, instead of living it large in Notting Hill, he ended up in Newcastle Upon-Tyne.

George has firmly established himself in the UK and Australian comedy circuits, has performed in various countries such as Spain, The Netherlands, Greece, Germany, and Hong Kong, and has supported Luisa Omielan and Sophie Willan on their UK tours.

Outside live comedy work, George has written for and appeared on BBC One’s This Week, The One Show, and has acted in Sky’s Summer Shorts. In 2016 George also was cast as the lead in a Greek-speaking play called Aphrodite’s Wedding, which went on for a week-long sold-out run at the Enfield Theatre.

Hailing from Estonia and just returned from a year in Vancouver, Canada, Ari Matti Mustonen has a bright future ahead of him. With enough on-stage energy to power a small town and punch lines to match, Ari has been enthralling audiences around the world with stories about life growing up in Eastern Europe. Ari Matti Mustonen is the most Finnish sounding name ever (you do know what Finnish names sound like right?) but he’s a homegrown Estonian. Ari has an effortless charm (ok it takes some effort) while being unafraid to put forward his point of view.

Ari has recently returned from a year in Vancouver, Canada where he worked as a feature act and headliner for Yuk Yuks and The Comedy Mix. As a highlight of his time, he self-promoted and performed his hour “Imported Goods” at the Rio Theater in Vancouver, selling 350 seats.

In his career, Ari has spent time in Australia, becoming a regular in Melbourne and around the country. Throughout Asia, he has performed at the Bangkok Comedy Club, Bangkok Hilarious, Crackhouse Kuala Lumpur, LOL Comedy, Takeout Comedy among others. He has opened for Chris Franklin, Al De Bene, Rizal Van Geyzel, Jim Brewsky, Lawrence Mooney.

Ari’s other passion is martial arts, he has become a figure in the local MMA community in Estonia and has commentated on numerous International pay-per-view fights.

“Ari is a great stand up! He has an enviable fearlessness. He’s going to go on to make many many people laugh all over the world.” – GLENN WOOL

That Comedy Podcast in Melbourne

Ari Matti on the web

With a reputation for quality and a sharp eye for talent, The Laughter Factory has showcased reams of A-list comics on their way to superstardom, including, Russell Peters, Michael McIntyre, Dara O’Brien, Mickey Flanagan, Jason Manford, Sarah Millican, Kevin Bridges, and Frankie Boyle.