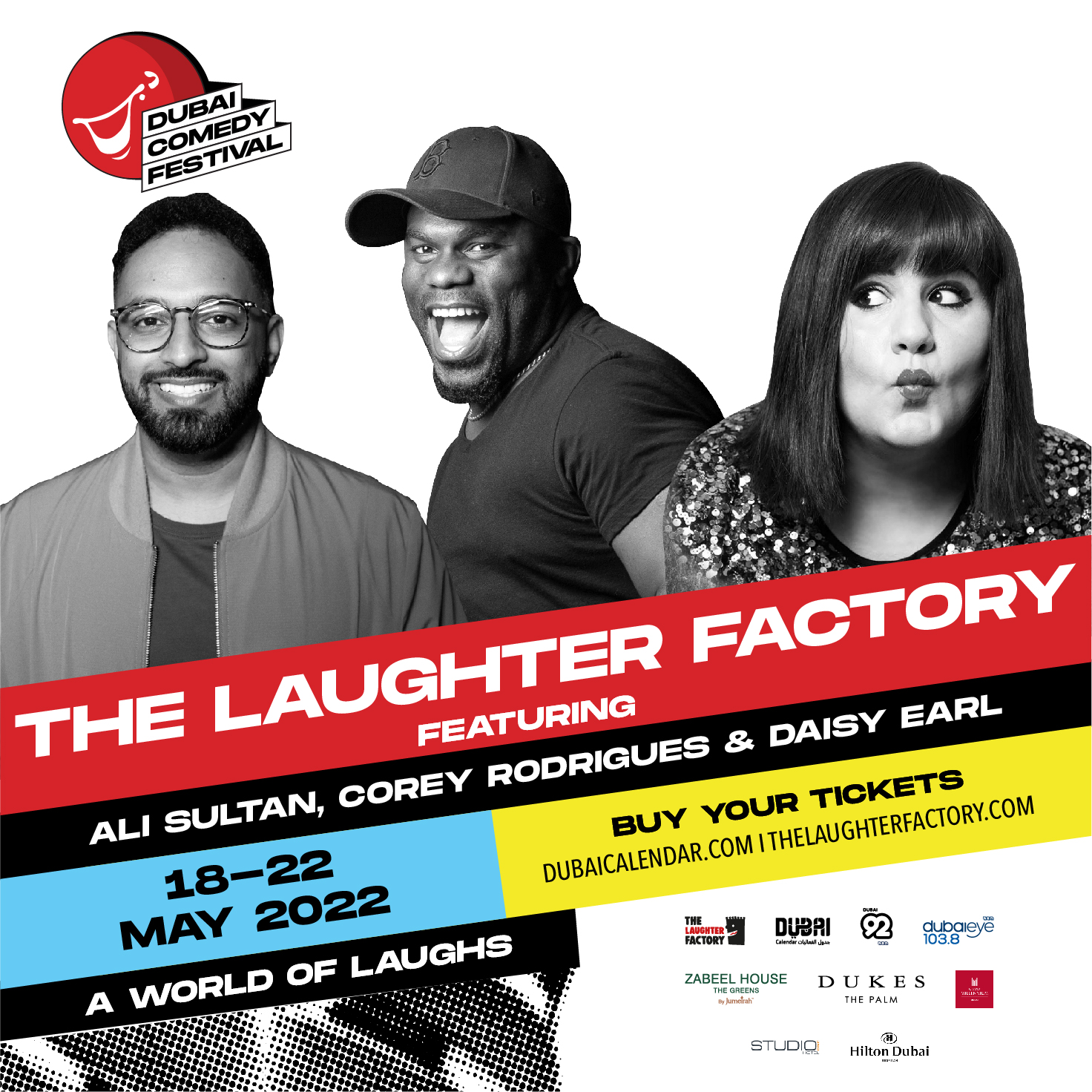 Our second leg of the 10-night festival will feature Scottish comedian of the year, Dasiy Earl. Described by the Huffington Post as ‘Strikingly honest and hilarious,’ Daisy also went on to win ‘Chortle Best Newcomber’ and regularly tours with Jason Manford and John Bishop. Daisy Earl is a festival highlight. See her.

Making his Dubai debut, Ali Sultan is a Yemeni-American comedian that shot to US fame on Kevin Hart’s Comedy Central’s ‘Hart of The City’ and ‘The Late Show’ with Stephen Colbert. This comedy provocateur both shocks and delights global audiences. Get ready for some world class-comedy.

Rodrigues has been featured on Late Night with Conan, HBO Max, EPIX, Laff Tracks, Gotham Live & Amazon Prime. His Dry-Bar comedy special exploded and has been viewed over 40 million times worldwide. Do not miss the chance to see one of the most exciting acts at the festival.

So be prepared for 10 days of guaranteed happiness. We hope you can cope with that!

Wednesday 18th May – Zabeel House by Jumeirah, The Greens Dubai

Ali is a professional Yemeni-American comedian seen on Kevin Hart’s Comedy Central’s Hart of The City and The Late Show with Stephen Colbert. He filmed his Half Hour comedy special in Dubai for Comedy Central Arabia. His latest specials can be seen on Wanda Skyes Unprotected Sets on Epix and DryBar.

Rodrigues has been featured on Late Night with Conan, HBO Max, EPIX, Laff Tracks, Gotham Live & Amazon Prime. His Dry-Bar comedy special exploded and has been viewed over 40 million times worldwide. He can currently be heard daily on Sirius XM.

SCOTTISH COMEDIAN OF THE YEAR 2015 – WINNER

Daisy is one of the fastest-rising stars in comedy today. Since starting stand-up in 2013, she has quickly attracted plaudits and accolades; winning ‘Best New Comedian’ at the Scottish Variety Awards in 2015, and then being crowned ‘Scottish Comedian of the Year’ in the same year, making her the first-ever female winner.
Following a sell-out show at the Adelaide Fringe in 2016, Daisy returned to the UK to scoop ‘Best Newcomer’ at the Chortle Live Comedy Awards before performing two further sell-out runs at the Edinburgh Fringe in 2016
and 2017.

Half Scottish, Daisy has performed regularly at the prestigious Stand venues in Scotland and was invited to perform at the ‘Scottish Comedian of the Year’ Winner’s Show during the Edinburgh Fringe in 2016. Daisy now resides in London, where she continues to make a splash on the comedy scene; performing in venues across the UK and earning a reputation as a promising and highly original talent. She recently supported Tom Stade on his nationwide tour and has just gone through to the regional final for ‘The Funny Women Awards ‘2018.
Daisy has appeared as a guest on BBC Radio’s ‘Breaking the News’, the STV ‘Late Show ‘and BBC Radio 4 Extra’s ‘Best of the Fest’. She is currently working on her hotly-anticipated debut solo show.

Having taken out the award for Scottish Comedian of the Year, as well as winning several Scottish Variety Awards and the Chortle Best Newcomer award winner it’s easy to see why Daisy Earl is such a rising star on the UK Comedy circuit. She’s also a favourite tour support for the likes of Jason Manford, John Bishop & Tom Stade!

As seen on BBC Scotlands Comedy Underground TV Special, BBC Radio 4’s Best of the Fest, BBC and Scotland’s Breaking The News as well as appearances at  top comedy clubs and festivals both in the UK as well as internationally. She’s one to snap up well in advance!