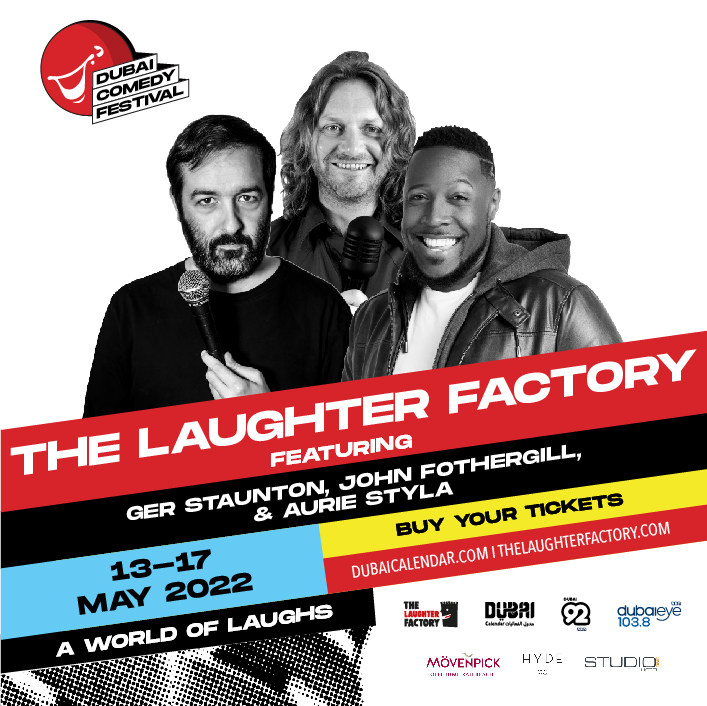 2022 is going to be the year that Dubai rocks with Laughter.

With a whopping 10 shows comprising of two separate lineups. The Laughter Factory is delighted to be a part of the ‘Dubai Comedy Festival’.

Different styles of comedy, flown in from different parts of the world, there will be something for everyone when it comes to live stand up.

John Fothergill will probably be the funniest person you will ever see. He leaves his audience aching with belly laughter “Everything he says is funny….he looks like he was born on stage, under a follow spot, with a mic in his hand……THE GUARDIAN. So what more can we say?

Next on the bill is supremely talented Aurie Styla. Don’t miss the chance to see one of London’s most popular comics, up close and personal before he’s playing arenas. This act is destined for stardom.

The final act on the first leg of the tour is the joyously funny Ger Staunton. Dubai is about to experience Irish storytelling at its finest. Ger will take us on an incredible journey through his magnificently insane adventures.

Aurie Styla is a stand-up comedian, presenter and broadcaster from London.

Having started stand-up comedy back in 2010, Aurie has tirelessly honed his craft and his likeable charisma has earned him fans in the thousands.

On Radio he is the host of ‘The Scene’ on BBC Radio London. A topical show in which he invites guests from all avenues of entertainment to interview, and discuss current affairs, with a comical twist. He has also appeared as cast on topical sketch show Newsjack (Radio 4).

Aurie has worked with many notable comedians from around the world, both as a fellow performer and also as a promoter for his phenomenally popular ‘ComedyMania’ events. His consistency and warm persona see him regularly employed as a warm-up comedian for the major broadcasters and on shows such as The Big Narstie Show and The Mo Gilligan Show.

Alongside his comedy work, he’s also cemented himself as an exceptional host for corporate events and has worked with, amongst others, Facebook, Jungle Creations, DTV, and Da Bounce in Holland.

In 2016, Aurie self-produced and toured his first live stand-up comedy special “Working… Hardly!”, around the UK, with all dates completely sold out. In 2017, he toured his second “Straight Up!” again with all shows sold out. Due to overwhelming demand, both tours were extended. His third show ‘Just Like that’ was also a complete sell-out. Aurie is the host of two hugely popular monthly residencies, at Vauxhall Comedy Club and BoxPark in London.

As an actor, Aurie played a co-lead in the 2019 horror comedy “The Living Dead’ produced and directed by Fredi Nwaka, and is the lead in the to-be-released British comedy ‘On The Other Foot’

A regular headline act on the Irish Comedy circuit, Staunton has been described by the International Comedy Club in Dublin as “One of the best comedy writers in Ireland.”

His material is meticulously crafted and delivered in the kind of playful, tongue-in-cheek style that endears him to audiences of all ages and demographics.

Before his last sell-out solo show of 2019 on March 11th in Whelan’s, Dublin, Staunton had previously been touring Europe, The UK, Scandinavia, California, and New York. Since the return of live entertainment in 2021 he has embarked on his 3rd European tour spanning Austria, Slovakia, France, Belgium, Luxembourg, and Holland.

“Incredibly funny” – The Examiner
“Immaculately woven anecdotal riffs with a smooth pace and a dark twinkle.” – The Independent
“One of the best comedy writers in Ireland.” – The International Comedy Club
“Weaving stories in the true tradition of Irish comedy, Outstanding” – Cosmic Comedy, Berlin

With sold-out shows in almost every city in the U.K, numerous appearances across the globe including The Far East & Middle East, acclaimed performances at Capetown, Adelaide, Melbourne, New Zealand, Edinburgh Fringe, and Derrys Exclusive Comedy Festival, special guest act for Little Britain Live, and Ed Byrne’s Live Tour, TV appearances including “Live at the Comedy Store’, “Live at Jongleurs”  and Dublins “Laughter Lounge” also various topical comedy shows and a long term member of the “impressive and influential” cutting edge team at London’s famous Comedy Store, John Fothergill has proved himself as a regular headliner at the most prestigious comedy venues in the world and one of the most experienced comedians in the business.