The Laughter Factory’s ‘Gone far mad, we are back sane!’tour 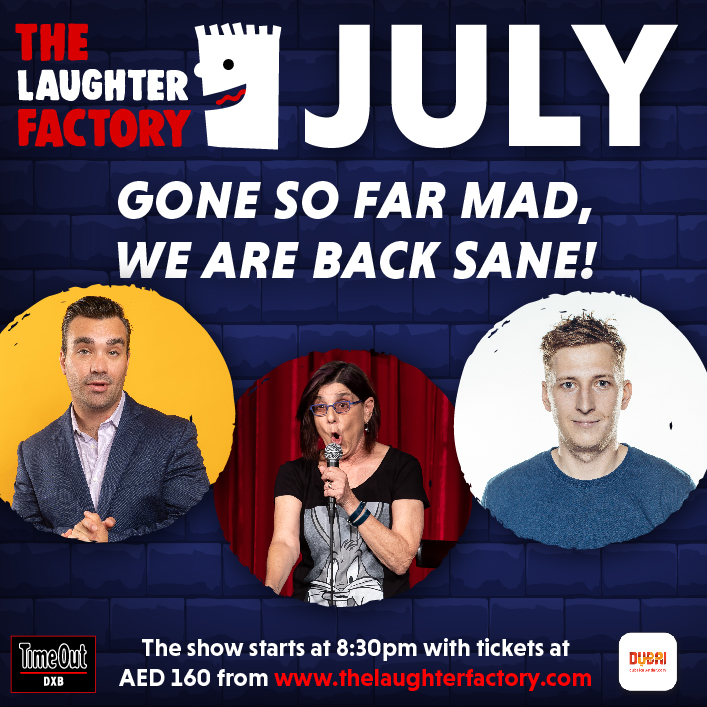 After 25 years of extensive research we have concluded one simple fact. ‘Good People are Good at Laughing!’

So, to make sure that the fun-loving element of Dubai, find each other. We have searched the world and found three of their finest comics to catapult us straight into our happy place.

Making his Dubai debut, Joe Larson has a list of TV credits that would make any celebrity go green with envy. The Tonight Show, America’s Got Talent and Gotham Comedy Live, are just a few of his claims to fame.

His unconventional parenting style has inspired him as a writer and actor on the hit show Babies Behaving Badly on Discovery Family. His immense talent and fantastic energy always deliver a brilliant live show.

Female powerhouse, Kandi Abelson has been headlining comedy clubs for 25 years. From Las Vegas to Anchorage and from London to Montreal, she feels at home on every stage. This is standup, the way you like it. Kandi will take you on a glorious comedy voyage, keeping you a float in a sea of giggles.

Finally after the huge success we have had over the last few shows with our ‘Eastern Block-head’ humor. It is time for ‘Polish treat’, Peter Szumowski. to take the stage. Being a You Tube sensation has meant he’s performed in over 30 countries. So expect a truly global, comedy perspective and an original spin on life in Poland.

When & Where:
The Laughter Factory, July 2021 tour dates

Joe is a comedian, husband and father – the former makes the latter well….interesting.

When Joe met his now wife she loved how much he made her laugh. He warned her that while she finds it cute now, she may feel differently when he is unable to do anything but joke during the heat of an argument. As his wife eventually found out “you’re funny all the time!” can quickly turn into “Does everything have to be a joke?”

Grow as a Comedian

Perhaps it’s not his fault, Joe is after all a second generation comedian. Much to his parent’s dismay at the age of twenty, Joe went into the family business. Straight away he was chosen College Comedian of the Year at the Las Vegas Comedy Festival and shortly after he made the move to New York City where he could be on stage every night.

Aside from the outrageous rent, rodents and 4AM wake up calls for his day job as a personal trainer, NYC proved to be exactly what Joe needed to grow as a comedian. Paying his dues at any club that would give him the mic, in just a short time he was working at some of the best rooms in the city including the famed Caroline’s On Broadway and Gotham Comedy Club. He was nominated “Best Up-And-Coming Comedian” at the NYC MAC Awards, was a finalist in both the prestigious Johnny Carson Great American Comedy Festival and Boston Comedy Festival and was part of the feature film Stand Up 360.

Just as comedy was taking off big time, Joe became a father. Unbeknownst to him this would not only take up every free second of his life but perhaps the biggest catalyst for his success. Becoming a dad gave Joe a new level of comfort in his role on stage and screen. Unconventional as always, Joe didn’t take on the traditional role of dad but rather he says he is simply a “man with a baby”.

He has made a cocktail with pureed babyfood and bourbon, he has changed a diaper in the green room before a set and he is currently lending his Man With A Baby voice as writer and actor on the hit show Babies Behaving Badly on Discovery Family.

Joe has also been seen on Gotham Comedy Live, NBC’s America’s Got Talent, Laughs on FOX, the Tonight Show’s Laugh Squad and the Speed Channel. On radio he is a repeat guest on Bob and Tom and the Bennington Show.

A lover of all things comedy, Joe is currently pursuing acting and writing roles for television as well enjoying every laugh he can give you while he’s on stage in NYC and throughout the US.

Joe lives in Brooklyn, NY with his two daughters and wife – as you’re reading this he is likely annoying her with a joke instead of apologizing for not taking the garbage out.

****Joe Larson is a husband, father and comedian who’s been seen on Gotham Comedy Live, America’s Got Talent and The Tonight Show’s “Laugh Squad.” He has been nominated for a prestigious MAC Award for “Best Up-And-Coming Comedian” and was a finalist in both the Johnny Carson Great American Comedy Festival and the Boston Comedy Festival and appeared in the film Stand Up 360. Most recently, you can see Joe on Babies Behaving Badly on the Discovery Family channel and as a host on Laughs on FOX.

Kandi Abelson has been headlining comedy clubs for 25 years. From Las Vegas to Anchorage and from London to Tel Aviv, she feels at home on every stage. Kandi has featured at the Montreal Comedy Festival “Just for Laughs” in both English and French and starred in her comedy special “Hard Kandi”. Kandi got her Mastersfrom American Film Institute, and her thesis film “Mergers and Acquisitions” won several awards at Film Festivals. Since moving from Los Angeles to Israel, Kandi has found a completely new audience in Hebrew. A stand-up clip in Hebrew of hers went viral and had over 1,000,000 views in 3 days. She works corporate gigs, comedy clubs and kibbutzim throughout the country most nights of the week. Kandi was on “Moadon Layla”, “Late night with Karin Paz” and the first season of “Israel’s Got Talent”. She is currently starring in a huge national commercial campaign for Klik candy

comedy page which is mostly in Hebrew https://www.facebook.com/kandicomedy/

Peter Szumowski is a Polish comedian based in Warsaw. He has been perfecting his craft for over 8 years, both in English and Polish. During this time he won many awards (that You have not heard about, so really no point writing this, but hey, whatever) and has been on Comedy Central and Polish National TV. Moreover he helped establish the comedy scene in Poland and his newest special has over 4mln views on Youtube. None of that really matters. All You need to know is that Peter is just a funny guy that likes to travel (he has performed in over 30 countries) and make people laugh. Not much more to it.