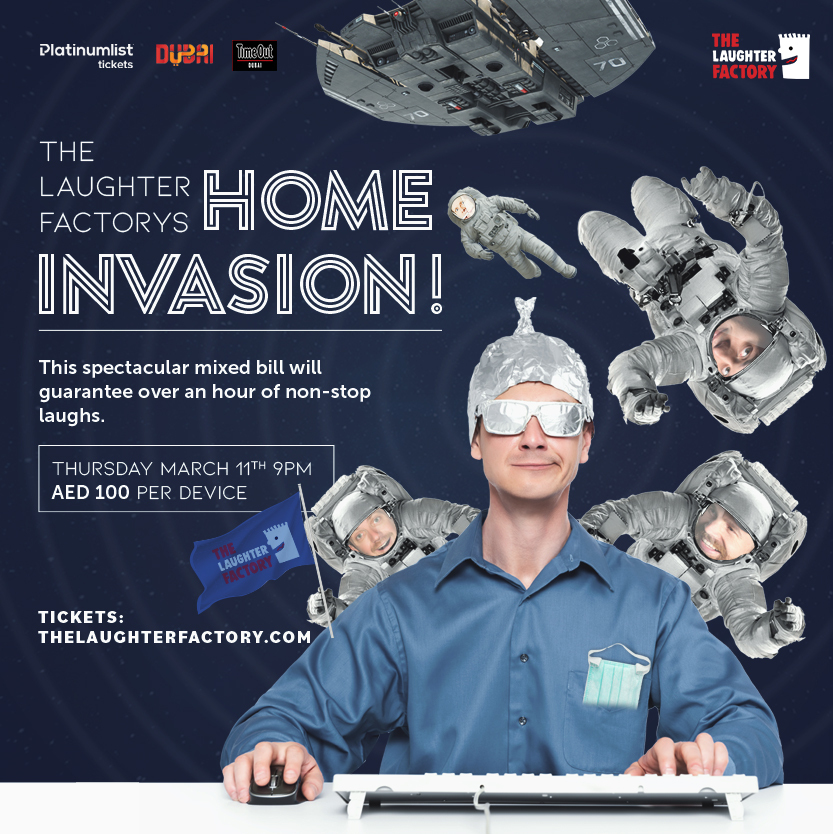 For the first time in the history of mankind, the Laughter Factory comedy club, will be invading your home with zoom comedy.

In 2020 the world changed irreparably, but laughter never ends. So grab yourself a drink and enjoy not 3 but 4 world-class comedians in the comfort of your own pad with the people closest to you.

Switch on your device and experience the absolute finest in stand up. Chuckle along with our regular Laughter Factory crowd (who are just as important as our comics) and enjoy the best night in town in the safest place possible. Home!

Star of stage and now screen, Danny O’Brien has become a master of zoom gigs. His ability to make people laugh whilst still sat on the couch defies all comedy logic.

Another zoomer hero, Damian Clark, is the Laughter Factory’s favorite Aussie. He no longer has to worry about his shows in Edinburgh selling out. He now has all the room he needs in cyber space, as he shoots into intergalactic stardom.

George Zach was one of the most well travelled comedians on the globe. He can now stay put and still reach his thousands of fans. This Greek comedy sensation crosses many comedy boundaries and has a show that reaches many different audiences.

Finally, Laughter Factory royalty, Stephen Grant, never fails to make people laugh like a train and his on line shows will not disappoint.

This spectacular mixed bill will guarantee over an hour of non-stop laughs.

Aussie boy Damian Clark explodes onto stage with his high-octane observational stand up. His last two Edinburgh Fringe shows received total sell out runs & reviews were nothing but overwhelming praise. One woman physically wet herself laughing. Bring a towel.

Damian has made Ireland his home and can be seen on RTE’s IFTA Award-winning REPUBLIC OF TELLY, TV3’s THE APPRENTICE: YOU’RE FIRED! plus wrote & co-starred in I DARE YA! which became the highest rating Irish comedy debut to date.

Now is the time to catch this raw talent as he stands on the cusp of stardom.

“Every joke – and I honestly do mean every single joke – is genuinely, gut-bustingly funny.” – Three Weeks

“A relentless onslaught of crippling laughs” – The Skinny

‘A relentless onslaught of crippling laughs’ The Skinny