The Laughter Factory’s “I think my algorithms hate me!” tour 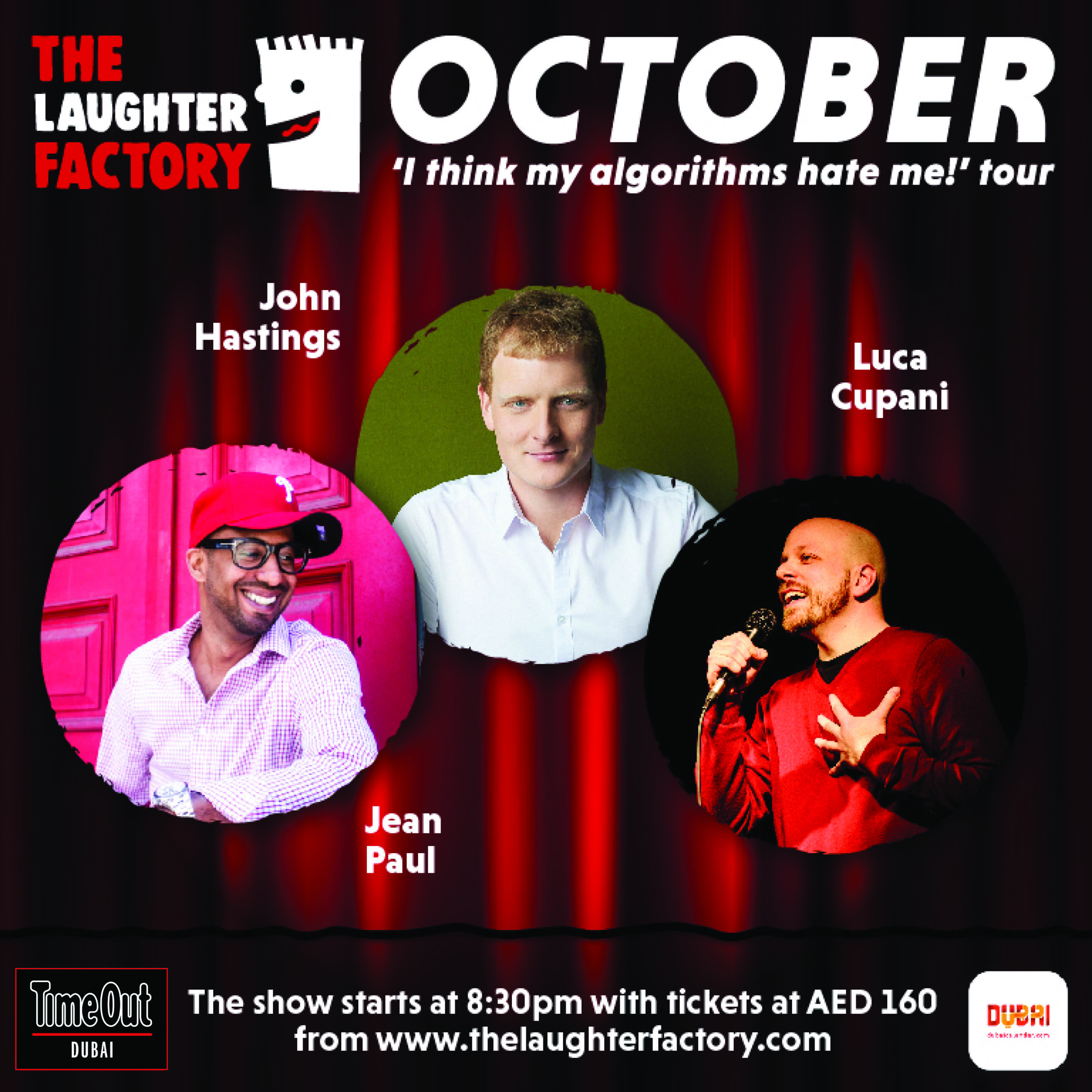 Oxytocin is one of our most important hormones and can only be produced when we are in contact with other humans. If you are spending too much time staring at a screen and starting to feel a bit paranoid, the Laughter Factory has the perfect cure. Our strict mobile phone ban means that for 2 hours you are forced to look up, laugh and not only enjoy the comedy but the other people in the room. You won’t just feel fantastic during the show but for days after.

The first of October’s happy hormone providers is star of BBC radio 1,3and 4, John Hastings. Pre-covid John headlined every major comedy festival in the world. He was most recently spotted on America’s Got Talent performing to no audience (THANKS COVID!) and yet still received a standing ovation from the panel.

When Kevin Hart saw Jean Paul, he just had to have him on his network, LOL.Jean Paul’s comedic style is the perfect blend of laidback Caribbean vibes and vibrant Toronto energy. His international comedy appeal has allowed him to perform extensively across Canada, the U.S., the Caribbean, Israel, South Africa and the U.K. Next stop, Dubai!

Finally, Luca Cupani, will be the first Italian comic to ever hit the Laughter Factory stage. One of the must see acts at the ‘Just for Laughs’ comedy festival in Montreal and winner of Edinburgh’s ‘So you think you are funny?’ This will be a rare opportunity to discover the hilarious side of Italy. We think that It might just be the start of the next Renaissance.

So come and join us for the best mental and emotional detox possible. It’s good to laugh and it’s even better to do it with other people. So, round up the troops and we will see you on the battlefield!

When & Where:
The Laughter Factory, October 2021 tour dates

Over the last fourteen years John Hastings has appeared at every major comedy festival in the world including Edinburgh (2012-2019), Melbourne and Just for Laughs Montreal. He has told jokes on BBC Radio 4, BBC 1, BBC 3, Comedy Central, CTV Australian Comedy Channel, and CBC The Comedy Network.  He is also the COCA Comedian of the Year, a Martin Sims Award Nominee, an Amused Moose Comedy Award winner, and was briefly a viral sensation after Dennis Rodman heckled him in Los Angeles. He was most recently spotted on America’s Got Talent performing to no audience (THANKS COVID) and yet still receiving a standing ovation.

“As a newcomer to the London comedy scene, Luca performed his first stand up set at the famous Gong Show at the Comedy Store – and won.  This set him off nicely on his path to winning the So You Think You’re Funny? competition in Edinburgh 2015. Luca appeared at the Just For Laughs Festival in Montreal, before bringing his show The Admin of Death and Other Confessions to the Free Fringe – for which he received 4 stars in the Scotsman. He has taken part in the Seattle and San Francisco International Comedy Competitions. In 2017 he took a new show, It’s Me!, to the Edinburgh Fringe, which subsequently had a sell-out run at the Bill Murray in London. In 2018 he returned to the Edinburgh Fringe with God Digger and in 2019 with Lives I’ve Never Lived.
Luca has gigged across Europe (Netherlands, Latvia, Estonia, Finland and Switzerland) and of course in Italy, where he has been a regular guest on the Italian TV show Zelig Time. His solo show in Italian is available on Amazon Prime Italia (Italian Stand Up, episode 3).”

Jean Paul’s comedic style is the perfect blend of laidback Caribbean vibes and vibrant Toronto energy.  His international comedy appeal has allowed him to perform extensively across Canada, the U.S., the Caribbean, Israel, South Africa and the U.K.

No stranger to the festival circuit, Jean Paul has performed at Montreal’s Just For Laughs Festival, Toronto’s JFL42, and the Halifax and Winnipeg Comedy Festivals.  In addition to his award-nominated television writing credits, Jean Paul has also made his mark on TV with appearances on The Comedy Network, CBC, and Kevin Hart’s LOL Network.

Social media handles are all @jeanpaulcomedy