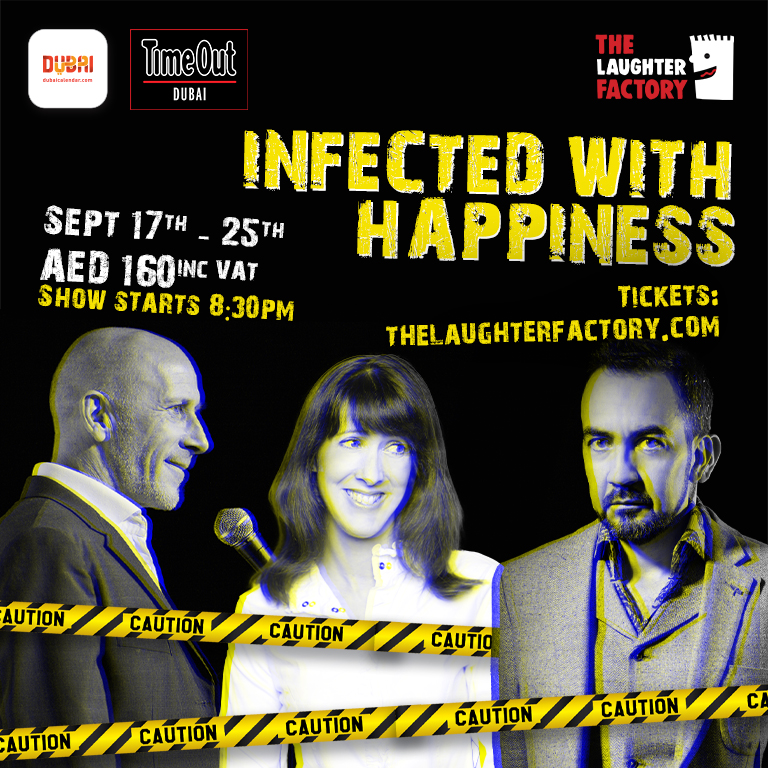 The time has come, to step away from your screen and join this live comedy show, that is going to restore us all, to our rightful place within the universe.

‘Laughing out loud, with each other’.

To take us all on this fun-filled adventure; The Laughter Factory has 3 spellbinding acts that guarantee an evening of non-stop belly laughs.

When Stewart Lee and Stephen Merchant go on tour, one of the few acts they trust with their carefully cultivated audience is Stephen Carlin. His sellout tour in Edinburgh “Pickwickian” is one of the hottest tickets at the festival.

When, ‘Shanghai City Weekend’ suggested that, Pierre Hollins should be made ‘Mayor of a small village’. We have to say, ’we wholeheartedly agree!’.

This published author not only writes beautifully crafted jokes but as an ex street entertainer, never fails to perform a hilarious stage show.

Finally, expect laughs a plenty from Sally Anne-Hayward. Described by ‘The Independent’ as “exceptionally funny” This fast-rising star has just toured with Sarah Millican, Russell Howard and Russell Kane.

So, don’t miss this wonderful opportunity to see some of the worlds finest, live, stand up in an intimate setting.

One item of food needed to be purchased at Movenpick JBR & Hilton Dubai Jumeriah. Call 0508786728 for details.

Show tickets must be purchased on www.thelaughterfactory.com

Ticket at AED 160 including VAT

Pierre Hollins is a comedian and writer

Pierre Hollins has been a comedy circuit favourite for many years, and has headlined clubs throughout UK, Europe, Middle East and Asia.

Sally-Anne Hayward combines the things you shouldn’t like about your best friend’s mum with the sensibilities of Jack the Ripper.
An accomplished radio presenter with stage and TV acting credentials (‘Absolutely Fabulous’ BBC, ‘Why the Long Faces’ Square Donkey Productions, and TV warm-up for ‘Deal or No Deal’ Channel 4), Sally-Anne’s confident persona and quick wit have rapidly made her a much sought-after comedian. She’s a regular compere at Glastonbury Festival, and a keenly anticipated turn on the UK and international comedy circuit.

Sally-Anne is an award-winning comedian (Holsten Pils ‘Fans of Comedy’ award) and a sought-after corporate performer (with clients including Orange and Alcatel).

She has proven her writing talents with numerous Edinburgh Fringe shows and can display a depth of material that marks out the best comic talent. She has performed all over the world and is currently supporting Sarah Millican on tour, having previously supported Russell Howard and Russell Kane on their UK tours..
Chortle praised her “bubbly stream of comedy anecdotes” and “butter wouldn’t melt in her mouth” style. The Independent simply called her “exceptionally funny.”

Sally-Anne Hayward is a stalwart of the comedy circuit and has performed stand up comedy in all five continents of the world.  She has been described by The Independent as “Exceptionally funny”