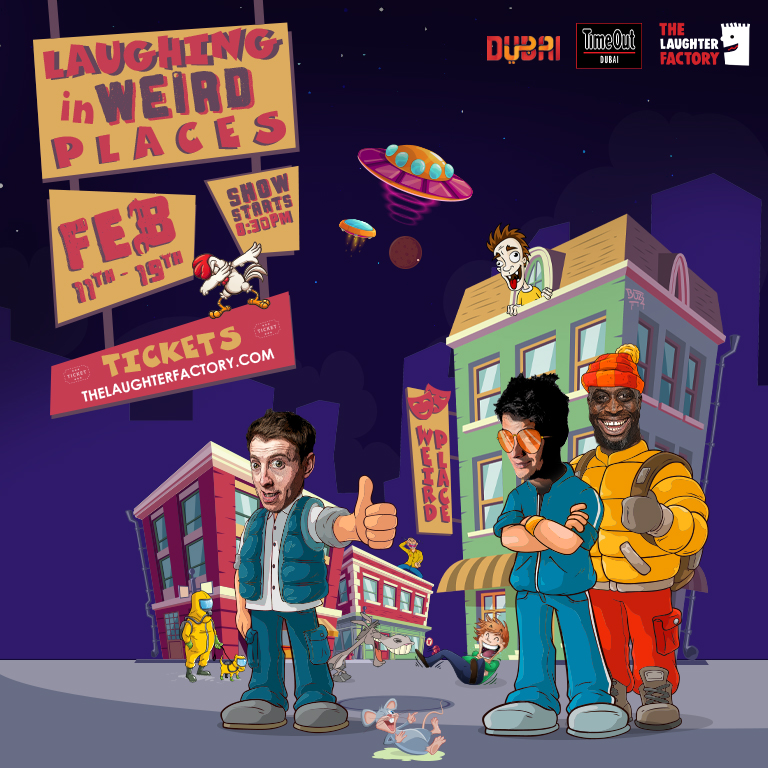 We know a bloke with a carpark, graffiti up the walls and guess what? It’s fully licensed.

So, as George Michael so famously said ‘Let’s go outside?’

For those you who like to try laughing in weird places, we are taking the Laughter Factory to Media One P7 Arena, for a cheeky alternative lunch

But no need to panic, our regular venues are still going ahead, with three comedy superheroes, who are going to rescue us from the mundane aspects of life on planet earth.

Starting us off, Cork comedian, Andrew Ryan, is one of the most exciting talents in recent years; in demand as an act and an MC at the biggest comedy clubs across the UK & Ireland.

Described as by the Melbourne Herald as  “Truly Terrific” . George Zach, who hails from Greece, has to be the funniest expat living in the UK at the moment. His unique style, never fails to deliver belly laughs, from start to finish.

Finally, all we can say about Emmanual Sonubi is ‘Wow!’

This comic has a stage presence that makes the Burj Khalifa look like a garden shed.

It is an absolute joy watching this mountain of a man dominate the room and keep everyone in the palm of his hand. Both men and women, simply melt infront of him into a gibbering pool of uncontrollable laughter.

Nights out don’t get much better than this.

When & Where:
The Laughter Factory, February 2021 tour dates

Andrew’s quintessentially Irish storytelling abilities and cheeky, friendly demeanour make him a natural stand up. He performed his debut hour show ‘Ryanopoly’ at the Edinburgh Fringe Festival in 2012, receiving rave reviews (‘Illuminating debut ★★★★’ – The Metro). In 2015 he was at the Edinburgh Festival with his latest show ‘Perfectly Inadequate’. Selling out his run at the Festival and having to put on extra shows.‘Hard not to enjoy’ ★★★★ Daily Record. He returned again to Edinburgh in 2016 with he new show ‘Ruined’.(‘An hour of hilarious comedy’ ★★★★- Edfestmag). In 2017 he brought his show ‘Did you get here alright?’ to Edinburgh and is now taking it across the Uk on tour (Rapturously Funny ★★★★- The List) In 2018 he won ‘BEST NEW SHOW’ at The Leicester Comedy Festival with his new show ‘ Is everything alright at home?’