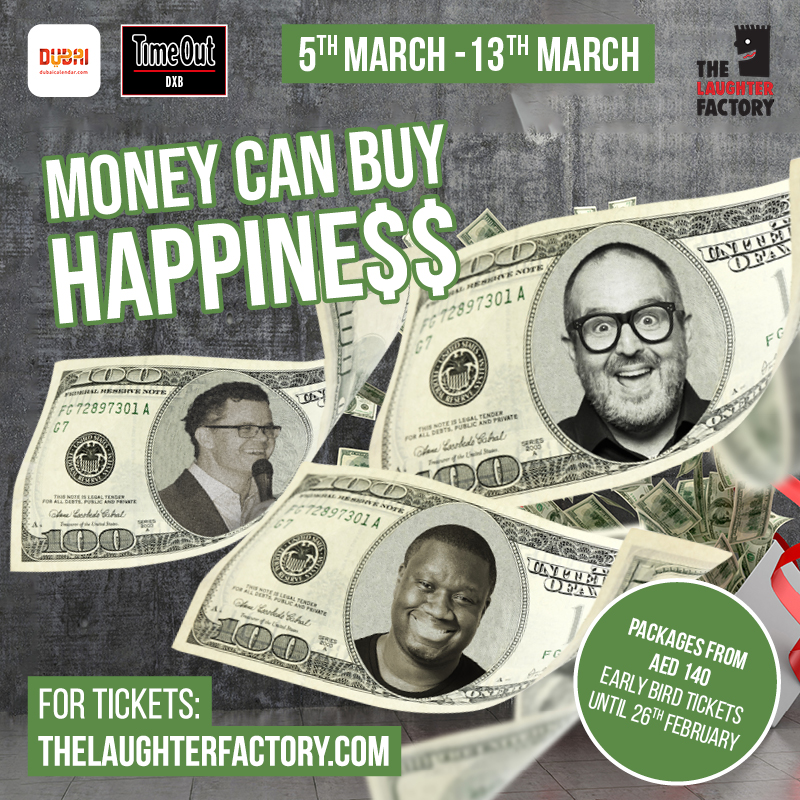 Anyone who claims that ‘money can’t buy you happiness’ needs to purchase a ticket to the Laughter Factory. You don’t need to buy a Ferrari or go trekking through a rain forest, just some brilliant live stand up comedy and a room full of open minded people and (yes you’ve guessed it!) ‘instant happiness!’

To ensure this happens, fans of Peter Kay’s Phoenix Nights will remember tiger- faced young Kenny who has just helped raise a whopping 5 million pounds for comic relief, Justin Moorhouse is a seriously impressive live stand up comedian who can rival any household name when it comes to making a room full of people sit up and beg for more.

Dominic Holland is not your average comic, this exceptional writer has several best selling books and never fails to deliver a unique set that has just popped into his head. Yet sounds like he’s been performing it for years. Dominic should be hailed as the undisputed ‘King of improv’

Finally bring your party hat, your silly hat and your clever hat and wear them all, while Funmbi Omatoyo takes you into some ridiculously new mental territory. This night of fun will make your pants wet in a good way.

Early Bird Tickets at AED 140 available until and including 26th February.

Funmbi Omotayo’s friendly, instantly likeable style won him the award for Best Newcomer at the Black Entertainment Comedy Awards. He has since gone on to win the prestigious Leicester Square New Act of the Year competition in 2012; shortly after becoming joint winner of Amused Moose’s Laugh Off Competition in the same year. Gently paced stories and anecdotes are delivered warmly and confidently from this relative newcomer. Funmbi is creating a huge storm on the comedy circuit with tales of living in Hackney, his Nigerian roots and his hilarious day to day observations.

“A charming young comic…he’s got the jokes to back up his charm. Soon, he could be playing to thousands” Time Out

“Plenty of original insights and honest home-truths to enjoy” Chortle

“A classy young stand-up and, a headliner in the making” London is funny


About The Laughter Factory