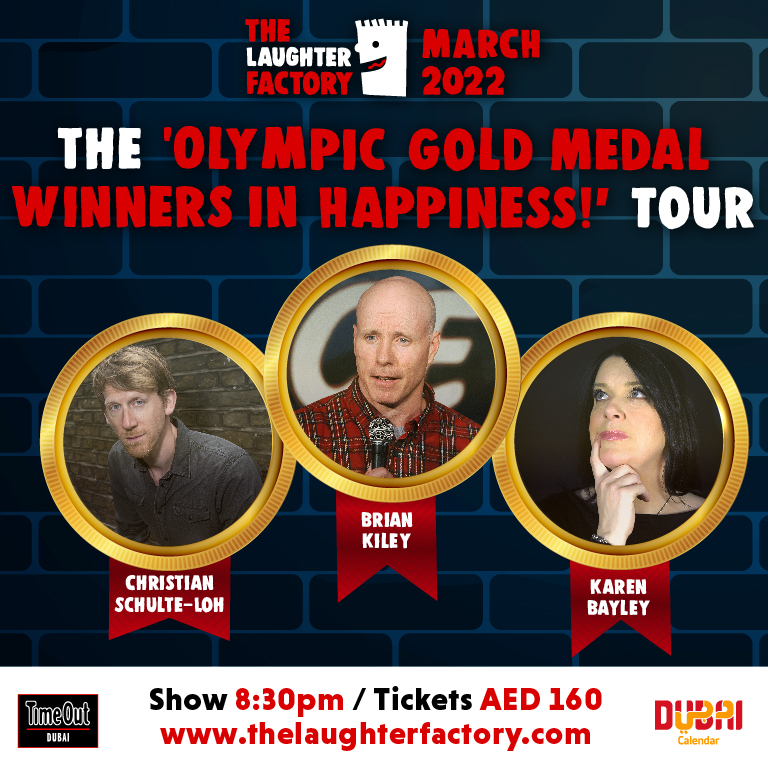 If comedians are the toys in the box we call life. We are about to step into Hamleys and play for hours. Comics may not know how to make themselves happy, but who cares about them? They have the power to temporarily, take all of our troubles away.

At the Laughter Factory we reckon that’s about as good as life gets, so let’s enjoy those moments.

Brian Kiley has received 16 Emmy nominations and won the 2007 Emmy Award for Outstanding Writing for a Variety, Music or Comedy Program.He appeared on The Late Show with David Letterman seven times; The Tonight Show with Jay Leno four times; and Late Night with Conan O’Brien 12 times. Basically, this man is very funny and has the paperwork to back it up.

Anyone who thinks that Germans don’t have a sense of humour are about to get a shock. Christian Schulte-Loh is a top international stand-up act from Berlin who has been making people laugh in clubs and at festivals in more than 30 countries. This globe-trotting phenomenon throws his audience off balance with his unique style of European humor.

Finally Karen Bayley is back by popular demand. Winner of the 2001 Komedia New Act prize, Karen Bayley followed by becoming the first ever, female winner of the prestigious Comedy Store King. She had a great run of shows 4 years ago in the sandpit, so we just had to bring her back to find out about all her latest exploits.

So let’s all throw our toys out of the pram in unison as we laugh together at some really, really, funny jokes.

When & Where:
The Laughter Factory, March 2022 tour dates

A staff writer for O’Brien since 1994, Brian has received 16 Emmy nominations and won the 2007 Emmy Award for Outstanding Writing for a Variety, Music or Comedy Program.He appeared on The Late Show with David Letterman seven times; The Tonight Show with Jay Leno four times; and Late Night with Conan O’Brien 12 times.

He was even once featured in The New York Times Sunday crossword. He has never completed said puzzle. Brian, who performs regularly at clubs in Los Angeles, has had a recurring role on the Cartoon Network’s Delocated and has appeared on The Bonnie Hunt Show; Comedy Central Presents; Dr. Katz, Professional Therapist; CBS This Morning; Caroline’s Comedy Hour; Comedy On The Road; the Showtime Comedy Club network; and An Evening at the Improv.

Christian Schulte-Loh is an international stand-up act from Germany who has performed in clubs and at festivals in more than 30 countries.

Christian regularly performs at the biggest clubs in the UK, Germany and on the European circuit. He has been called “a funny German – the only one!” (KKUNST MAGAZINE, Belgium), and THE SPECTATOR wrote about him: “one of the most subversive acts ever”.

Christian performs in English and German, and has also gigged in Spanish. He has toured the world, often appears on German television and is a regular at the Edinburgh Fringe.

In addition to being a comedian, writer and MC, Christian is also very experienced in the field of corporate events.
In April 2017 he published his first book in Germany. “Zum Lachen auf die Insel” is about his adventures as a German comedian in Britain.

“One of the most subversive acts ever. The gags have an astonishing freshness and power.” – THE SPECTATOR

“A funny German – the only one!” – KKUNST MAGAZINE, BELGIUM

“Has the hilarity factor.” – CREAM OF THE FRINGE

Britain vs The World (BBC Radio 4)