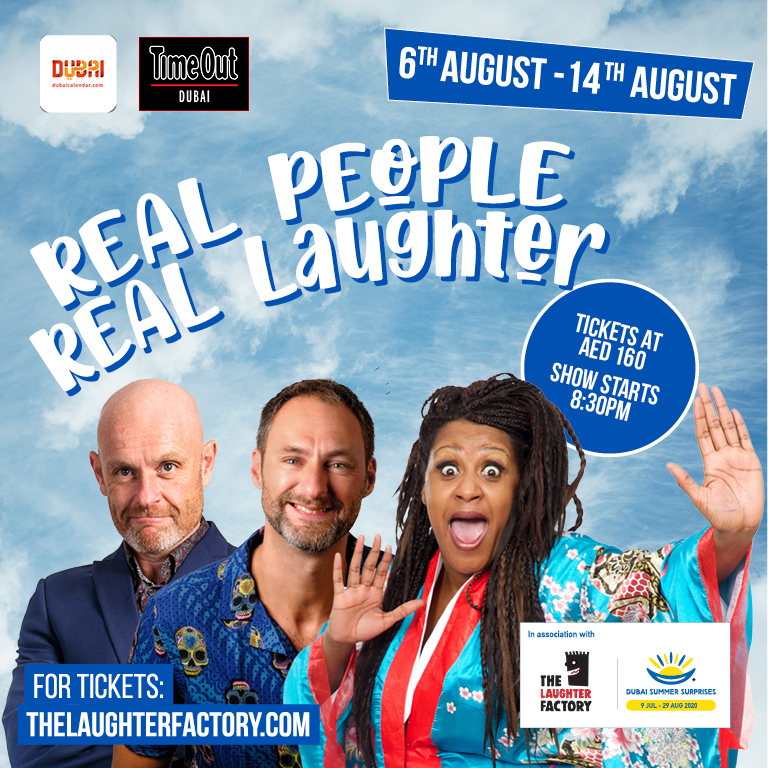 Following on from our sellout tour in July, The Laughter Factory is back in August with our greatest quest of all time, ‘To save the world from sadness’.

We have adapted our set up to meet social distancing requirements, ‘Our guests are spoilt rotten with table service. We hope they don’t go soft on us’ say’s Northern Bird Gail Clough.

To help knock us into shape, three of the world’s finest stand ups will be armoring themselves up to charge into battle against boredom.

Leading the way will be Scottish comedian Leo Kearse, part of the new wave of raw, bold, American-inspired comedians taking the big UK clubs by storm. His “Extinction Rebellion” video slamming woke lefties went viral, selling out shows in the UK. Meanwhile, Leo’s popularity abroad is rocketing, with 2019 seeing him perform in 20 countries.

Making his debut on the Laughter Factory Eddy Brimson will be bringing you a supersized cup of comedy. Don’t miss this rare opportunity to get intimate with one of the UK’s most hilarious headline acts.

Finally, refreshing and fearless Dana Alexander, has been described as ‘smart, irreverent and revolutionary’. One of Russell Howards most memorable guests, Dana is without doubt one of Britain and Canada’s hottest emerging young comedians,

So come and join this celebration of puns, one-liners and wordplay as the Laughter Factory offers positive, comic solutions to stop humanity falling into the abyss.

Show tickets must be purchased on www.thelaughterfactory.com

Ticket at AED 160 including VAT

This summer season, the 23rd edition of Dubai Summer Surprises (DSS) features a multitude of exclusively held events hosted across Dubai. The Laughter Factory Supper Club part of the seven-week extravaganza which offers exciting events, promotions and sales ranging from 25 per cent to 90 per cent off, unlimited entertainment, F&B offers and family fun.

Scottish comedian Leo Kearse is part of the new wave of raw, bold, American-inspired comedians taking the big UK clubs by storm. His “Extinction Rebellion” video slamming woke lefties went viral, selling out shows in the UK. Meanwhile, Leo’s popularity abroad is rocketing, with 2019 seeing him perform in 20 countries. Among various credits, Kearse has written for BBC shows including Breaking The News, Mock The Week and The Mash Report. Leo played Mick Fleetwood in the ITV drama Breaking The Band: Fleetwood Mac.   Leo is also the co-creator of sell-out show Hate ‘n’ Live, which has improvising comedians hating on audience suggestions – Whose Line Is It Anyway? meets Room 101.

“Genuinely thought-provoking…hugely entertaining….a warm and personal show” ★★★★ THE SCOTSMAN
“A triumphant hour of outrageous and dark jokes, not pushing but gleefully running straight through the boundaries of taste and acceptability in today’s “woke” culture” – BRITISH COMEDY GUIDE RECOMMENDED SHOW
“Kearse is seriously good. Quick, funny, smart and to the point…hilarious” – KATE COPSTICK
“A giant of the art” – STEVE BENNETT, CHORTLE
“Rampantly self-interested, prone to generalisations and stereotypes, and with a penchant for punching down rather than up…the audience were roaring with laughter” – ★★★★ One4Review.co.uk
“The fact he gets belly laughs out of global warming, self-identification and the unequal distribution of white privilege does not make him a racist, transphobic monster, just a very good comic” ★★★★ THE SCOTSMAN
“Very funny, very dirty, occasionally shocking, but edgily likeable and happily endearing, eliciting the guilty pleasure of laughter from a wide-eyed audience” – ★★★★ THE LIST
“Very tall and very funny… such energy and aplomb that the audience is left powerless to resist… one of the most enjoyable shows of the Fringe” – THREE WEEKS ★★★★
“A personal and entertaining comedy hour” – ★★★★ LONDON THEATRE
“He churns out the gags, provoking a steady stream of laughs in his tight set, which strides purposefully between topics with muscular, efficient lines on each. Kearse was both an audience and judges’ favourite, and the deserved winner” – Steve Bennett, Chortle
“Bad…genuinely offensive…a traumatic experience for some audience members” – The National Student

Dana Alexander began her career at the age of 18 years old in Canada, before long she began touring nationally with Yuk Yuk’s Comedy Clubs and completed 5 television galas and a handful of radio spots for CBC and Sirius XM. In 2011Dana made a move to the UK where she premiered her one woman show at  The Edinburgh Fringe Fest. After rave reviews and several nominations including “Best Comic” and “Best International Act” from Chortle and Black Comedy Awards.

Eddy Brimson is one of the UK circuits most in demand headline acts working regularly with all the leading promoters.

Eddy is equally at home internationally having taken to the stage from Norway to China with just about everywhere in between. He was one of the first ever comics to perform in Myanmar and invitations to perform at the Altitude Festival in the French Alps, the New Zealand International Comedy Festival and both the Melbourne and Perth Comedy Festivals in Australia have secured his place in the comedy industry.

He is also a regular at the Edinburgh Festival where he once even played a gig naked! Thankfully no cameras were allowed into the venue.