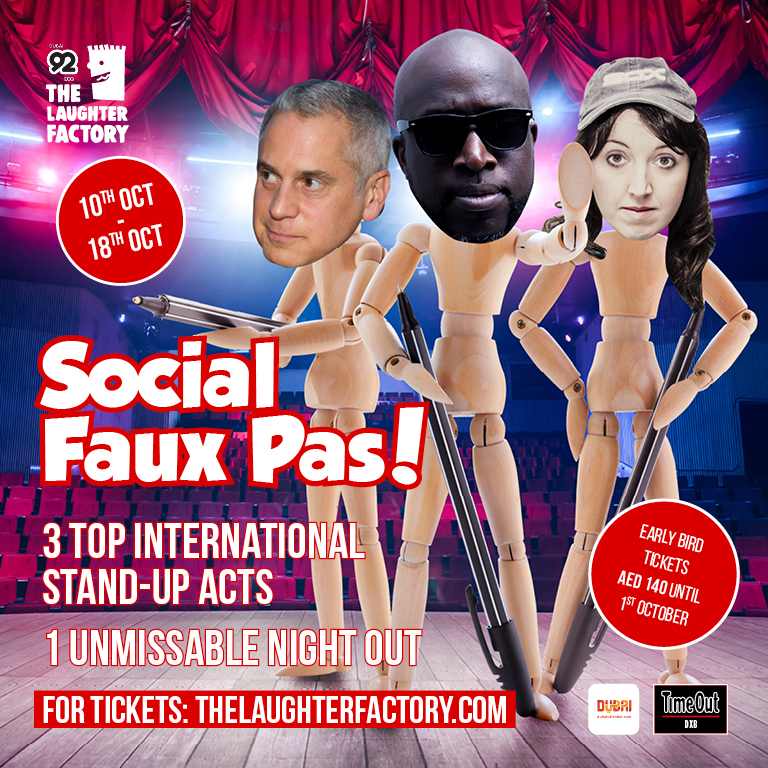 Alerting ‘Comic Con’ fans, Mike Capozzola, is an absolute star of this popular event. If you fancy a spot of time travel, with a hilarious touch, this man is definitely for you.

If laughter is one of life’s treasures, this month’s trove would make the Queen of England go bright green with envy. Crowning this diamond-studded tiara of pleasure, Eleanor Tiernan, the undisputed Royalty of social faux pas, will be bestowing upon us a mater class in stand up.

Also this month, after realizing that throwing people out at closing time was easier if you made them laugh on the way out, former doorman, Emmanuel Sonubi, has taken the comedy world by storm. Headining every major club in the UK, there isn’t a comic on the circuit that doesn’t dread following this comedic force of nature.

Early Bird Tickets at AED 140 available until and including 1st October.

Mike plays an an agent in “Men in Black International.”
Facebook.com/ComedianMikeCapozzola   www.Capozzola.

The Laughter Factory hosts a fresh bill of three different professional comedians every month, many already familiar stars of the screen on hit USA and UK TV shows.

The Laughter Factory’s commitment to comedy has been recognized by numerous publications, winning several accolades over its two-decade history, including a Lifetime Achievement Award from Time Out Dubai in 2013.