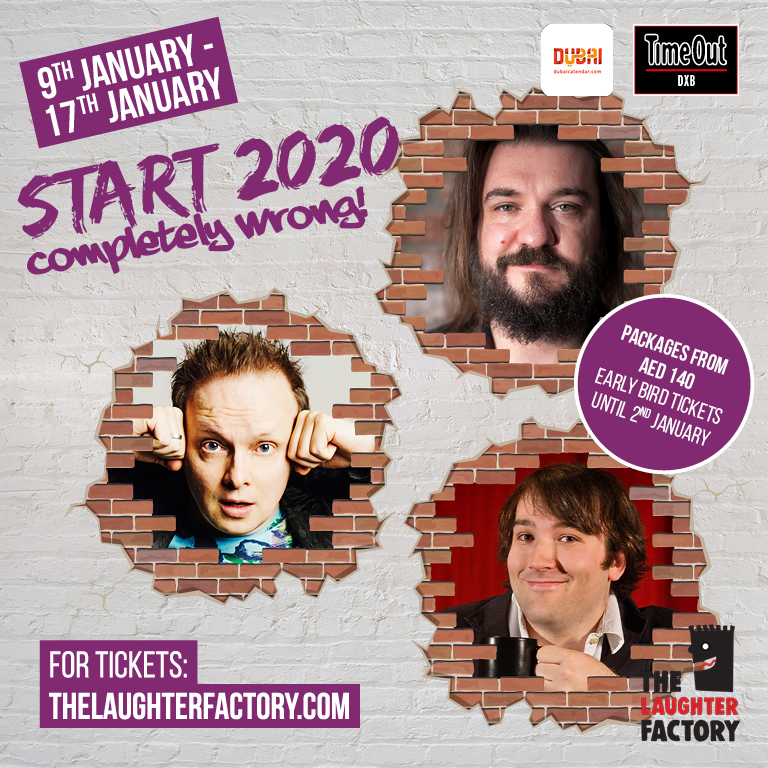 Did you know that all life’s problems can be solved with laughter! So, join us at this month’s best comedy show and laugh all your troubles away!

This fabulous, fun night out, is like no other. ‘All Killer, No Filler’ is the Laughter Factory mantra.

Compere extraordinaire, Stephen Grant is the winner of several of the UKs most prestigious compere awards.

Described by The Scotsman, “Brilliant. This show will have you chuckling to yourself hours afterwards.”

Stephen Grant never fails to blow away his audiences, with his witty, sophisticated examination of almost everything.

Making his debut performance will be Matt Reed. This cheeky Geordie is not for the faint hearted, but for those who like their comedy with some meat on its bones, Matt Reed is ‘Fillet Mignon, served rare’.

Finally, deliciously defiant Peter White is one of the biggest names to come off the ‘Just for Laughs’ comedy festival in Montreal. This hugely gifted Canadian funny man is what happens when genius and humor collide.

So come join the fun and set your watch to ‘happy o’clock’. Leave your inhibitions at the door. The Laughter Factory will leave you feeling fabulous.

Early Bird Tickets at AED 140 available until and including 2nd January.

As cheeky as he is wonderfully brutal, Sunderland boy Matt is a welcome addition to any comedy night entertaining the crowd while skilfully destroying any heckler that crosses his path. A regular face at all the major clubs in the country Matt is also in great demand as MC for music festivals, burlesque nights and corporate occasions. He and Viz’s Simon Donald run a monthly quiz night from The Stand in Newcastle where Matt is also a regular at Red Raw.

He is in great demand as a host and headliner for club nights, festivals and corporates around the country, and is booked up to a year in advance for weekend gigs.  His affable style has won him fans across the country, playing with the crowd with a natural rapport found in few comics. Not for the faint-hearted, Matt dishes out all styles of material from the delightfully perverse to unique observations and audience interaction.

“Brilliant, always original…one of the newest stars of comedy…the finest compere I’ve seen in a long time…” The Leeds Guide

Originally from Nova Scotia, Canada, Peter White was a computer engineer. He went to school for it. Unfortunately it took him a long time to realize that he hated engineering with a passion. Luckily he found comedy.

He started performing stand-up comedy in 2005, and within a year was named one of the “Top 5 Up and Coming Comedians in Canada” by CBC Radio’s So, You Think You’re Funny? Quickly he began headlining clubs, universities and theatres across the country. He’s a favorite at festivals all across Canada, including the Prestigious Just For Laugh’s Comedy Festival, as well as three consecutive years at the Halifax Comedy Festival.  In 2010 Peter recorded an hour long stand up special which can be seen in Canada on CTV and the Comedy Network’s.  Since arriving in the UK Peter has been invited to appear on Comedy Central’s Comedy Store Live.

Peter is also a very accomplished writer. He has written for the Gemini Award Winning This Hour Has 22 Minutes and the Gemini Award Nominated That’s So Weird on YTV. He has also written and performed pieces for CBC Radio One and XM Satellite Radio. His writing has been nominated for both a Canadian Comedy Award and a Writer’s Guild of Canada Award.

Now based in London, Peter can be found performing at clubs across the UK and throughout Europe, and has quickly established himself as one of the top new comics to watch on the circuit.