The Laughter Factory’s ‘Starting The Year, In The Worst Possible Taste!’ Tour 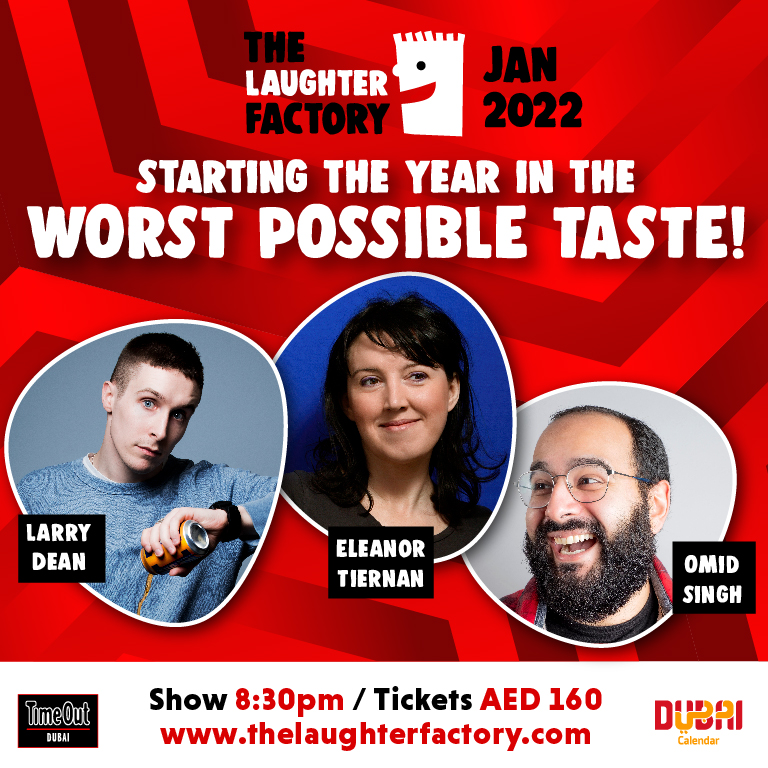 If you are only going to stick to one resolution in 2022 it has to be ‘Get more humor into your life!’ Sharing a good joke with other people is the perfect antidote to stress. It stops you taking others and more importantly yourself, too seriously.

The perfect way to keep your new good-habit is to bring your favorite people to the best comedy night in the Middle-East. To start 2022 in the ‘worst possible taste’, The Laughter Factory is flying in three of the Edinburgh Fringes most badly behaved acts.

Star of ‘Mock the Week’, ‘Live at the Apollo’ and Michael McIntyre’s Big show’ Larry Dean was crowned Scottish comedian of the year at the tender age of 23. Since then, this comedy giant has gone on to be one of the most successful comics on the global scene.

Next on stage, born to an Indian father and Iranian mother, Omid Singh is one of the top multicultural comics working today. Not that he considers himself a public symbol or boundary-breaker. As he puts it onstage, “I don’t do anything scary when I go to the airport…but I do like to see how far I can walk away from my luggage.”

As he sees it, celebrating diversity allows him to connect with every type of audience imaginable.

Finally, we have one of Stewart Lee’s favorite acts on the bill. Eleanor Tiernan is one Irelands funniest people. Having headlined numerous festivals and appeared on some of the best Irish TV shows, Eleanor Tiernan lights up a room like the Burj Khalifa on New Years eve.

This ‘Best of the Fest’ show will feature your favorite comedians from the Edinburgh Fringe.

Treat someone you care about to a ticket. It’s one of the best presents you can buy them.

When & Where:
The Laughter Factory, January 2022 tour dates

Larry Dean is an award-winning comedian and writer.

A hot ticket on the touring circuit, Larry has performed his shows across the UK and Ireland to jam-packed rooms. Larry’s fan base is international, as a regular at Melbourne International Comedy Festival, Christchurch Buskers Festival, Perth Fringeworld and the invitation-only Montreal Just For Laughs Comedy Festival.

Larry’s broadcasting career continues to go from strength to strength as a familiar face from BBC2’s Mock The Week, Comedy Central UK’s Roast Battle and Guessable, plus ITV2’s The Stand Up Sketch Show. Larry has also performed twice on BBC2’s hit stand-up show Live At The Apollo, along with BBC1’s Michael McIntyre’s Big Show and BBC Scotland’s A Night At The Theatre.

Double Edinburgh Comedy Award-nominee and star of Live At The Apollo returns with a brand new hour of ‘confessional storytelling at its funniest’ (★★★★★ Herald).  As seen on Michael McIntyre’s Big Show, Mock The Week and Roast Battle.