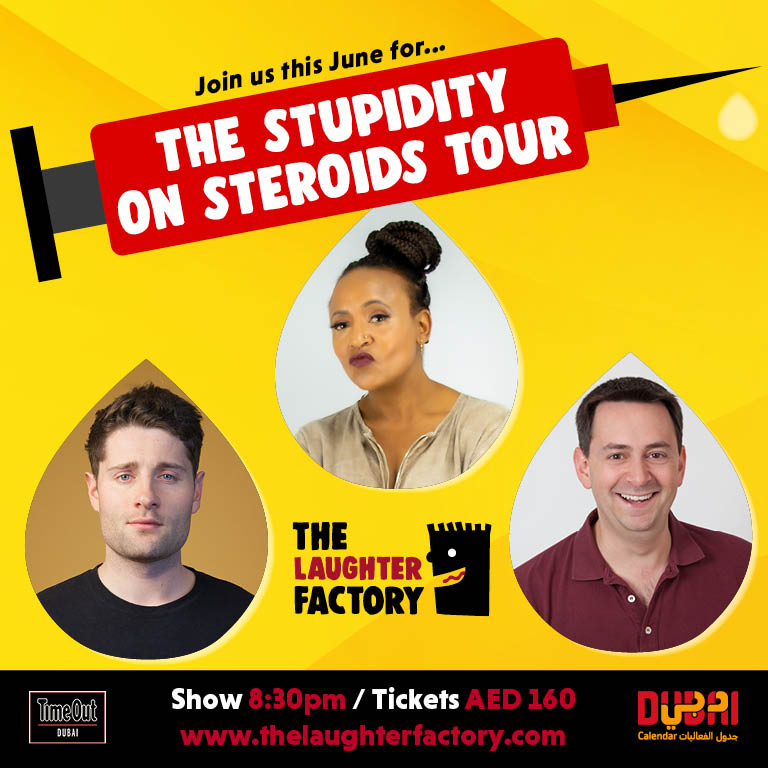 The June Laughter Factory will probably be the funniest show you will see this year.

Making his Dubai debut, Tom Elwes, is one of the rare Instagram, TikTok, stars who is equally funny live. During lockdown you are bound to of seen some of his clips, so make sure you get to see Tom perform comedic brilliance on stage.

Phillip Simon will also be bringing his hilarious debut show to Dubai, one of the most respected stand ups on the UK club scene and writer for ‘Mock the Week’ he will guarantee a fun packed show.

Described as ‘Compelling voice of a rarely heard African perspective’ by Fest Mag, Njambi McGrath is the winner of multiple awards and is often described as trailblazing. This important voice is a must see comedian.

So round up the people you like and bring them for a good laugh.

When & Where:
The Laughter Factory, June 2022 tour dates

Tom Elwes is a stand-up comedian, writer and actor. As a life long Londoner, he uses a combination of storytelling and acute observations to make sense of his chaotic existence. His quick wit and high-energy charm make him one to look out for in the future. Tom is one of the newest comics to break through on the comedy circuit. He is a regular at the Top Secret Comedy Club and Vauxhall Comedy Club.

Tom spent most of 2020 developing a strong online presence and now has 10s of thousands of followers on Instagram, TikTok, and facebook and his sketches have been viewed millions of times.

He is currently working on a web series for Pulped.

Philip is one of the most sought after comperes and opening/closing acts working on the UK comedy circuit today. He has written for Mock the Week, Newsjack and Newsrevue. He gigs throughout the UK, as well having performed as far flung places as America, Scandinavia, Europe, The Middle East and New Zealand where he headlined at The Classic in Auckland.

‘Philip Simon is never less than hilarious’ (The Stage)
‘With Philip Simon as compere comedy is guaranteed.’ (The Jewish Chronicle)

Njambi McGrathis an award-winning comedy star with a hit BBC Radio 4 Series, selected for BBC Radio 4 Comedy of the Week https://www.bbc.co.uk/programmes/p09ws280. Her legendary comedy specials have had successful Soho theatre and Edinburgh runs and now on Amazon Prime and NextUp. Njambi has performed all over Europe and Africa with a tour of Dubai scheduled. She is currently supporting Jason Manford on tour. She won the coveted Hackney empire New Act Of The Year (NATYS) Award 2019. She is the author of the critically acclaimed memoir Through The Leopards Gaze.

She was in the original line up of the (ARIA) Radio Awards hit BBC World comedy show ‘New Year’s International Comedy Celebration. Since her debut in 2010, she was voted 1 of 5 top up and coming female comedians 2012 by Fabulous magazine barely 14 months later. She was shortlisted for the BBC Radio New Comedy Awards x 2 a year later. She guested shows like BBC Two Edinburgh Nights, BBC One Sunday Live, Channel 4, Saturday Live BBC Radio 4, Loose Ends and ½ hour profile on BBC World service and has been showcased on BBC Radio 2 and BBC Radio 4Xtra. She has been profiled in the Evening Standard, The Guardian, Daily Telegraph, The Scotsman, Daily Nation (Kenya) featured on Arise TV. She reached the finals of many comedy competitions.

Praise for Njambi on writing

“Written with poetic fortitude, Through The Leopard’s Gaze reveals that the hardest part of survival is not the experience of violence but the pressure you feel to make sense of it. Bravely sharing her own attempt to confront the past, Njambi McGrath’s memoir is a stunning portrayal of human brutality and human resistance – heart-breaking and empowering in equal measure.” David Lammy MP.

“Britain is traumatised by it’s history” The Evening Standard

“Smart and Sardonic” The Guardian

“A must see” The Scotsman