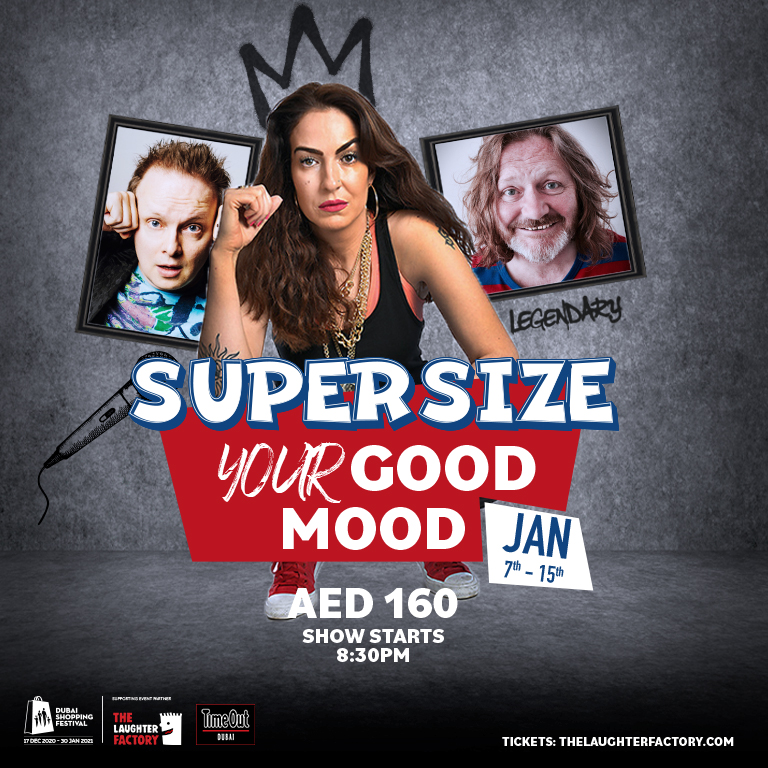 We all had to cut back on lots of things in 2020. However, 2021 is the year of sheer excess when it comes to laughter. To make sure that we gorge on more than our fair share of happiness the Laughter Factory is bringing us a line up that will leave our comedy taste buds tingling with delight, long after the show.

Making her debut on the Laughter Factory, we are thrilled to welcome, Ester Manito, an Arab Essex girl who will challenge every single preconception of what that means.

Esther’s rage, from the stage, talks stereotypes, feminism, racism, relationships and her quest to control her body hair.

Next on bill, compere extraordinaire, Stephen Grant is the winner of several of the UKs most prestigious compere awards.

This legendary performer never fails to blow away his audiences, with his witty, sophisticated examination of almost everything.

Finally, Laughter Factory royalty, John Fothergill, is the undisputed king of inappropriate, live stand up. This act produces more comedy gold than the bank of England.

So, start the year as you mean to go on, by sharing an abundance of joy, love and laughter

When & Where:
The Laughter Factory, January 2021 tour dates

An Arab Essex girl who will challenge every single preconception of what that means. Esther’s rage from a stage talks stereotypes, feminism, racism, relationships and her quest to control her body hair.

Esther performs at most of the main comedy clubs on the circuit where her rage at daily injustices have made her a regular. Esther is also a regular performer on the Arab and Muslim circuit including the Super Muslim Tour.

Her debut hour “Crusade” 2019 was voted in the top ten shows by Funny women, and given 4.5 stars Edfest Magazine, 4 stars Funny Women and 4 Stars One4review.

Esther has written and performed stand up for the Nationwide TV campaign.

WITH SELL OUT SHOWS IN MOST EVERY CITY IN THE U.K, NUMEROUS APPEARANCES ACROSS THE GLOBE INCLUDING THE  FAR EAST & MIDDLE EAST,

SPECIAL GUEST ACT  FOR LITTLE BRITAIN LIVE AND ED BYRNE’S LIVE TOUR , T.V. APPEARANCES INCLUDING “LIVE AT THE COMEDY STORE’, “LIVE AT JONGLEURS”  AND DUBLINS “LAUGHTER LOUNGE” ALSO VARIOUS TOPICAL COMEDY SHOWS AND A LONG TERM MEMBER OF THE “IMPRESSIVE AND INFLUENTIAL” CUTTING EDGE TEAM AT LONDONS FAMOUS COMEDY STORE , JOHN FOTHERGILL HAS PROVED HIMSELF AS A REGULAR HEADLINER AT THE MOST PRESTIGIOUS COMEDY VENUES IN THE WORLD AND ONE OF THE MOST EXPIERIENCED COMEDIANS IN THE BUSINESS.

One of the best things about watching live comedy is seeing a comedian finally find their comic voice. Some comics never find it, but when one does, there’s no mistaking it. Suddenly, that ordinary bloke behind the mic becomes a cartoon version of himself. Everything he says is funny, and anything that happens to him is more material for his act. It’s partly about finding out who you really are, and how the punters really see you, but the main part remains a mystery. Yet whatever that mystery consists of, John Fothergill has just found it. He’s always been a solid comic, but now he looks like he was born on stage, under a follow spot, with a mic in his hand.

He started out in showbiz in a band called One Hand One Heart, managed by Chas Chandler of Slade,

Animals and Jimi Hendrix fame. They were   signed by Epic, then Sony, and after they were dropped, he went to work on a gas rig. It’s my guess that this cocktail of toil and rock’n’roll is what made him a comic.  See for yourself.