The Selfdrive Laughter Factory’s ‘Take your mind off the world!’ tour 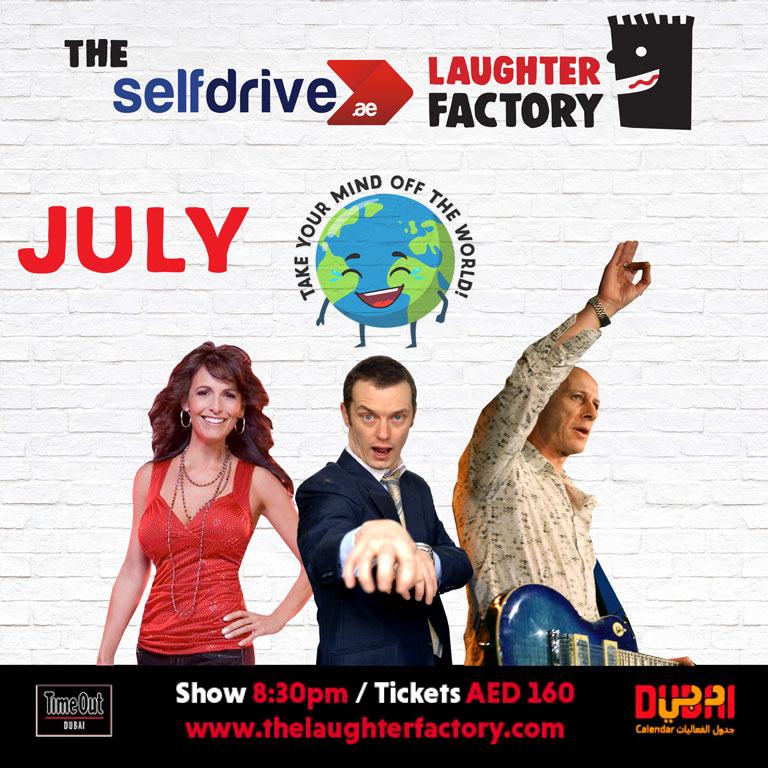 Gail Clough the founder said “we were looking for a company that will add value to our community, we want our customers to be safe and happy” Selfdrive.ae offers a bespoke, first-class service when it comes to car renting. Selfdrive.ae, is a smart mobility Super App, that allows users to rent a car on demand in a simple, safe and flexible way right from 1 day to 3 years and available across UAE; offering from top 20 car brands and over 65+ car models. We believe this is the future of mobility in UAE and we are delighted to be in bed together.

Dubai’s best comedy event returns in July, so book early to avoid disappointment. The Selfdrive Laughter Factory always brings high-calibre stand up and to make sure we have a laugh-a-minute show, Paul Tonkinson, former Time Out London, comedian of the year will be bringing his unique style of physical comedy to the Gulf. Paul is one of the UKs finest acts. This sensational performer has been described as a ’One-man Simpsons cast’.

Next we have American act Lisa Alvarado, who will be travelling a long way and bringing some well polished jokes with her. Born to Peruvian parents, she is known in the US as the ’Latin Queen of Comedy’. Her TV credits tell us, when it comes to live comics, we are in a very safe pair of hands.

Finally, comedy circuit favourite, Pierre Hollins, is always hugely enjoyable. This former street performer is highly entertaining and delivers a show that often whips the crowd into a state of euphoria.

So come and take your mind off the world for a few hours. It’s good to laugh!

When & Where:
The Laughter Factory, July 2022 tour dates

Lisa Alvarado, “The Latin Queen of Comedy” is Tina Fey meets Sophia Vergara. Born to Peruvian parents, Lisa shares her background, being a single Mom, and life experiences in a hilarious, relatable way!

Ms. Alvarado was voted “Best Up & Coming Latino Comedian” by The LA Comedy Festival and her jokes have been quoted in The New York
Times. Lisa is an accomplished writer as well, as staff writer on two different TV shows, one for MTV3 and the other entitled “Funny You Should Ask” adding over 150 episodes to her credits. Recently, she sold her first feature length script to a streaming company acquired by Sony Pictures.

Lisa is the creator & producer of three original web series. She won “Best Actress in a Web Series” and “Best Comedy Web Series” Finalist at the Official Latino Short Film Festival. Her first documentary, the critically acclaimed story about a dying man’s final wish to perform Stand Up Comedy and their journey together to accomplish his dream entitled “Don’t Wait: The Michael Schmid Story” is now available to stream

As owner, Lisa’s goal at LA Amigas Productions is to empower women and ethnically diverse writers, actors, producers, editors and directors while delivering excellent content with a strong point of view and a sh*t ton of depth and humor.

Pierre Hollins has been a comedy circuit favorite for many years, and has headlined clubs throughout UK, Europe, Middle East and Asia.