The Laughter Factory’s ‘Taking Over the World One Joke at a Time!’ Tour 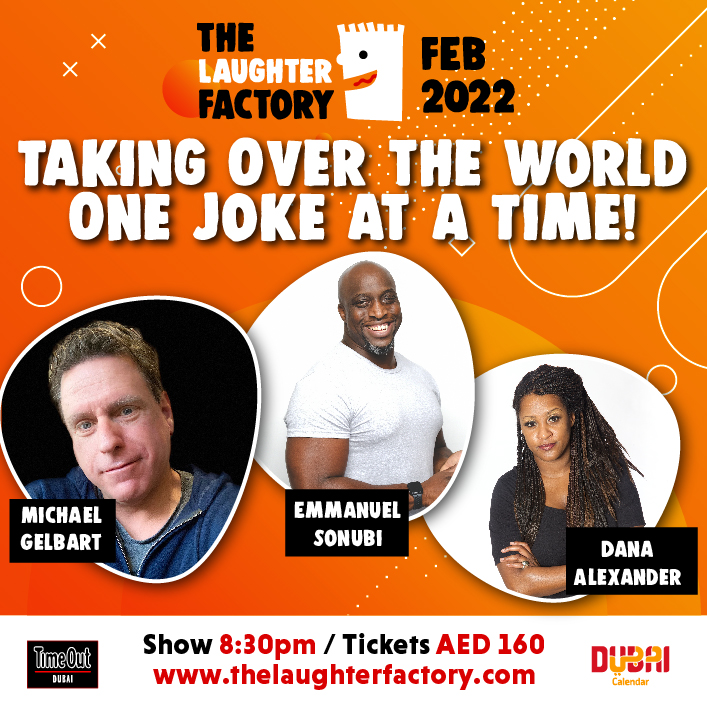 The Laughter Factory is beyond delighted to be opening in the best bar in town, Lock Stock & Barrel, Grand Millennium Business Bay. The two heavy weights of Dubai nightlife have got together to bring you the ultimate after brunch party. The very best in live stand up coupled with the liveliest venue in the city is going to be a marriage made in hell. We are all can’t wait to to feel the heat and burn.

Sparking the flames by making his debut on the Laughter Factory, we have the Dom of unbridled and unfiltered comedy. Michael Gelbart, is not only a best-selling author but also boasts prime time specials on Comedy Central and Amazon Prime. He was also a star of the Late Late show and Comics Unleashed.

This risk-taking, comedy-whirlwind, captivates audiences and ridicules them into temporary submission.

When we want a great referral for the Laughter Factory we always turn to Jason Manford for advice,”One of my favourite discoveries of 2019 was Emmanuel Sonubi. Hilarious, warm and unique. If you don’t see him now, you won’t be able to smugly tell your mates about it when they’re paying £50 for a crap seat at the O2!”  Enough said, Jase!

Finally, both ‘Refreshing and Fearless’ is the best way to introduce Dana Alexander. Her comedic style has been described as ‘smart, irreverent and revolutionary’. Currently one of Britain and Canada’s hottest, emerging young comedians.

So let’s raise the roof and the dead (maybe not!) Come and join us for what is always the most outrageous, fun, night-out in town.

When & Where:
The Laughter Factory, February 2022 tour dates

Comedian/Writer Michael Gelbart has appeared on The Late Late Show on CBS, Comics Unleashed and Comedy.tv. He has had two prime-time specials on CTV and CBC, which have both aired on Comedy Central. His latest special  “All New Smash Hits” is now on Amazon Prime.

He has written over 50 episodes of series that have aired on Disney, Nickelodeon, Teen Nick, Starz Kids, Cartoon Network and, as well as being creative consultant on full seasons of shows and on-camera as lead guest character.  His career began as writer and then head writer of the Canadian Screen Awards (formerly the Geminis). He spent two years performing in theaters as feature act for fellow Canadian comedian Norm Macdonald.

Michael has written and co-starred in a Christmas movie.  “A Very Cool Christmas” aired nationally every holiday season on Lifetime and now has a permanent home on Amazon Prime.

Additionally, his comedic novel “The Other Oprahs” about four women named Oprah who aren’t Oprah Winfrey was a best seller that reached a diverse audience, crossing boundaries of both race and gender.  He has recently adapted it to pilot script, while continuing to create new content for the world to eventually enjoy.

Emmanuel is one of the most asked about acts, and is in hot demand as a headliner, Emmanuel has performed on Comedy Central and ITV2 Stand Up Sketch show. Most recently performing on Live At The Apollo 2021 and he has been working as tour support for Jason Manford 2021.

“One of my favourite discoveries of 2019 was Emmanuel Sonubi. Hilarious, warm and unique. If you don’t see him now for a tenner, you won’t be able to smugly tell your mates about it when they’re paying £50 for a crap seat at the O2!”  Jason Manford

Dana Alexander began her career at the age of 18 years old in Canada, before long she began touring nationally with Yuk Yuk’s Comedy Clubs and completed 5 television galas and a handful of radio spots for CBC and Sirius XM. In 2011Dana made a move to the UK where she premiered her one-woman show at The Edinburgh Fringe Fest. After rave reviews and several nominations including “Best Comic” and “Best International Act” from Chortle and Black Comedy Awards.