The Selfdrive Laughter Factory’s ‘Best Christmas Party in the World Ever!’ 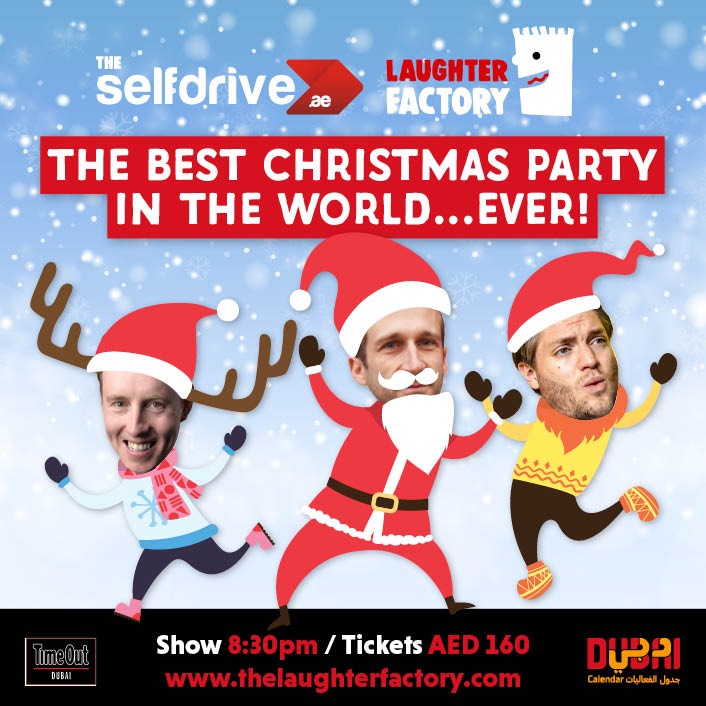 Laughing, drinking, eating and cavorting. With the ultimate after party ‘Disco Inferno’ brought to you by DJ Gail’. The Selfdrive Laughter Factory will make sure that grown-ups have the best Christmas party in the world ever!

Ideal for groups of friends and office parties alike, the Selfdrive Laughter Factory will guarantee that you and your crew will have more fun than a 6 year- old on Christmas morning.

This outrageous fun night out, boasts three of the funniest people flown in from UK and Europe.

Back by popular demand, Andrew Ryan’s quintessentially Irish storytelling abilities and cheeky, friendly demeanour make him a natural stand up.   Winner of ‘The Best New Comedy Show’ in Leicester Comedy Festival and star of BBC Russell Howards ‘Good News’. Andrew Ryan has been described as one of the most exciting talents in recent years.

Making his Middle Eastern debut Liam Withnail is a multi-award winning Scottish comedian. With more 5 star reviews than the Dubai skyline and 10 million on line reviews. What could possibly go wrong?

Finally, the most outrageous act we have had on the Selfdrive Laughter Factory, Romanian born Radu Issac, is definitely not one to bring Grandma too. This man is impossible not to laugh at.

So gather your friends, for the best end of season bash in town. End the year with a good laugh and a dance. Enough said!

When & Where:
The Selfdrive Laughter Factory, December 2022 tour dates

Andrew’s quintessentially Irish storytelling abilities and cheeky, friendly demeanour make him a natural stand up. He performed his debut hour show ‘Ryanopoly’ at the Edinburgh Fringe Festival in 2012, receiving rave reviews (‘Illuminating debut ★★★★’ – The Metro). In 2015 he was at the Edinburgh Festival with his latest show ‘Perfectly Inadequate’. Selling out his run at the Festival and having to put on extra shows.‘Hard not to enjoy’ ★★★★ Daily Record. He returned again to Edinburgh in 2016 with he new show ‘Ruined’.(‘An hour of hilarious comedy’ ★★★★- Edfestmag). In 2017 he brought his show ‘Did you get here alright?’ to Edinburgh and is now taking it across the UK on tour (Rapturously Funny ★★★★- The List) In 2018 he won ‘BEST NEW SHOW’ at The Leicester Comedy Festival with his new show ‘ Is everything alright at home?’

A previous finalist in Scottish and English Comedians of the Year along with multiple Scottish Comedy Award nominations, and the WINNER of the Best MC Award. Liam is a very funny, clever, affable and high energy act, with a fair few 5 star reviews under his belt and over 10 million online views. One you want to snap up for how far in advance he is booked.

Radu Isac is a veteran Romanian comedian. He moved to London in 2015 and in 2017 made it to the final of the English Comedian of the Year competition.

His stand up was featured on multiple BBC and Comedy Central programs. And in 2019 he wrapped up his second solo show at the Edinburgh Fringe Festival.

“The audience loved it and I think you will too” – CounterCultureUK