The Selfdrive Laughter Factory’s “Come ride with us!” tour 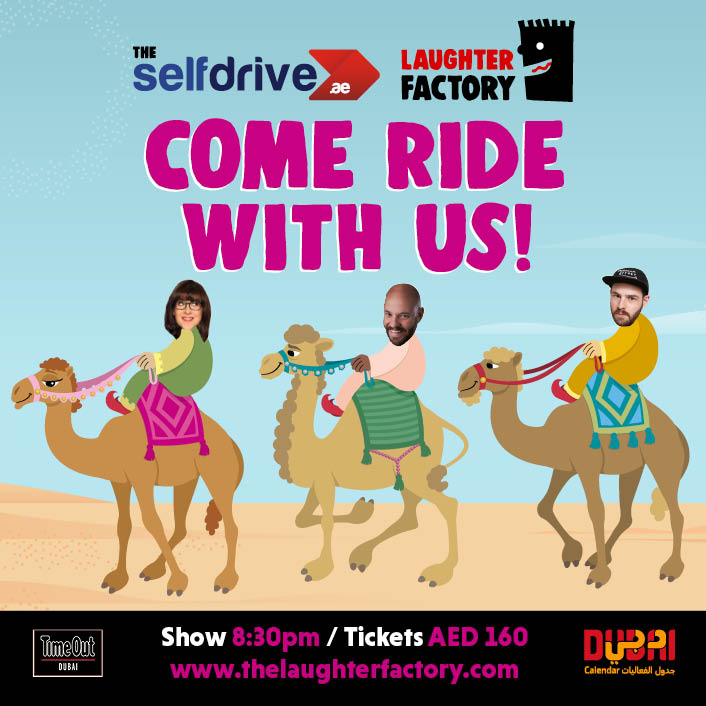 Gail Clough the founder said “we were looking for a company that will add value to our community, we want our customers to be safe and happy” Selfdrive.ae offers a bespoke, first-class service when it comes to car renting. Selfdrive.ae, is a smart mobility Super App, that allows users to rent a car on demand in a simple, safe and flexible way right from 1 day to 3 years and available across UAE; offering from top 20 car brands and over 65+ car models. We believe this is the future of mobility in UAE and we are delighted to be in bed together.

Come and see the comedy show of a lifetime. The Selfdrive Laughter Factory is bringing three 5 star rated comics to the Gulf as the ultimate distraction away from the of summer heat.

When it comes to Ken Garr, over 30 million followers can’t be wrong. He is always a hot ticket at the World Famous Hollywood Improv and a highlight of the festival “Laugh Your Asheville Off”.

Ken is also regular feature on comedy central. Comedy fans, this act is not to be missed.

Next we have making his debut in the gulf, comedy rapper and writer Joe Jacobs. His live shows effortlessly flit between hip hop and comedy and he’s been seen/heard on Channel 4, BBC Radio 4, BBC 6 Music, Radio 1XTRA, plus gained millions of viral video views online.

Finally, the Laughter Factory’s favorite Canadian act, Allyson June Smith, returns to the Middle East “Absolutely nailed the support slot! She has set the bar high! Think I need a different less-goodsupport!” – Jason Manford. What more can we say?

So “come ride with us” on this delightful comedy journey with laugh-out- loud performances from beginning to end.

When & Where:
The Selfdrive Laughter Factory, August 2022 tour dates

Ken Garr grew up on the south side of Chicago. The son of a retired Chicago Fire Fighter and Homemaker, Ken proudly hails from three generations of fire fighters. The youngest of 4 children, Ken’s hilarious views on life are derived on growing up in a blue collar family with his own white collar aspirations.

A former Managing Director at NASDAQ, Ken spent 13 years in corporate sales before leaving 6 years ago to pursue his dream of being a stand up comedian and motivational speaker. Since then Ken has been featured on Sirius XM Radio, Fox, HULU and Comedy Central as well as featured in several Comedy Festivals including the “Laugh Your Asheville Off”, Big Sky and the World Series of Comedy Festivals.” Ken was also a finalist in the prestigious 40th Annual San Francisco International Comedy Competition, The San Diego Comedy Festival and the Ventura Comedy Festival and he performs regularly at the MGM Grand in Las Vegas at Brad Garrett’s Comedy Club.

Ken is currently the host of “The Kym & Ken Show” on Dash Radio which has 30 million subscribers and performs regularly at the World Famous Hollywood Improv where he created and hosts the Improv’s official talent development show, Lab Work, weekly.

A graduate of the world famous Second City Conservatory Program in Chicago, Ken brings the influential characters of his life to stage with energy and zeal to produce a show that is nothing less than extraordinary.

Joe Jacobs is a London based comedian, rapper and writer. His live shows effortlessly flit between hip hop and comedy and he’s been seen/heard on Channel 4, BBC Radio 4, BBC 6 Music, Radio 1XTRA, plus gained millions of viral video views online.

On the live circuit, he’s a regular at The Comedy Store, Top Secret, Glee, Up The Creek, Backyard Comedy Club, Covent Garden Comedy Club, Knock2Bag, Downstairs At The Kings Head, Banana Cabaret, The Distraction Club and many others.  He has provided tour support for acts such as Jamali Maddix, Dane Baptiste and even opened for Bill Burr at The Comedy Store in Hollywood.

In 2017, Joe took Ripe to the Edinburgh Fringe where it received critical acclaim. In 2019, he returned with Grimefulness.

Joe’s first foray into radio was with Hip Hop’s Laughing Stock on BBC Sounds in September 2020. This show was soon added to BBC’s Seriously podcast, showcasing the best documentaries from the BBC worldwide.  In addition to stand up, as solo artist Jester Jacobs, he’s put out music since his debut Mental Disorder in 2008. Since then, he has had regular releases with performances nationally and internationally.

dynamite brand of hilarious material, driven by the strong rhythms that are a hallmark of so

Her bold, observational style saw her quickly achieve prominence in Canada, with credits

including her own hour long TV comedy special, radio shows and festival appearances; she

Female Stand Up. Her talent has taken her all over the world, and has led to her residing in

the UK, where she rapidly rose through the ranks of the circuit to make a name for herself

“Yet another hilarious Canadian with great hair” – Stewart Francis

“Wasn’t afraid to be shocking and explicit… hilarious” – **** Three Weeks

Drawing inspiration from the funny side of everyday life, she knows exactly how to play her

audiences to ensure her performances are always personal and engaging.

“Absolutely nailed the support slot! She has set the bar high! Think I need a different less-good

Allyson performs for audiences ranging from corporate parties to regional clubs. Whether

she’s on the bill as MC, support, or headliner, she skillfully delights them all with her sassy

blend of ballsy stand-up, and hilariously insightful commentary. She works for all the major

UK and international promoters, and is a regular support for Stewart Francis and Jason

Manford on their live tour dates.