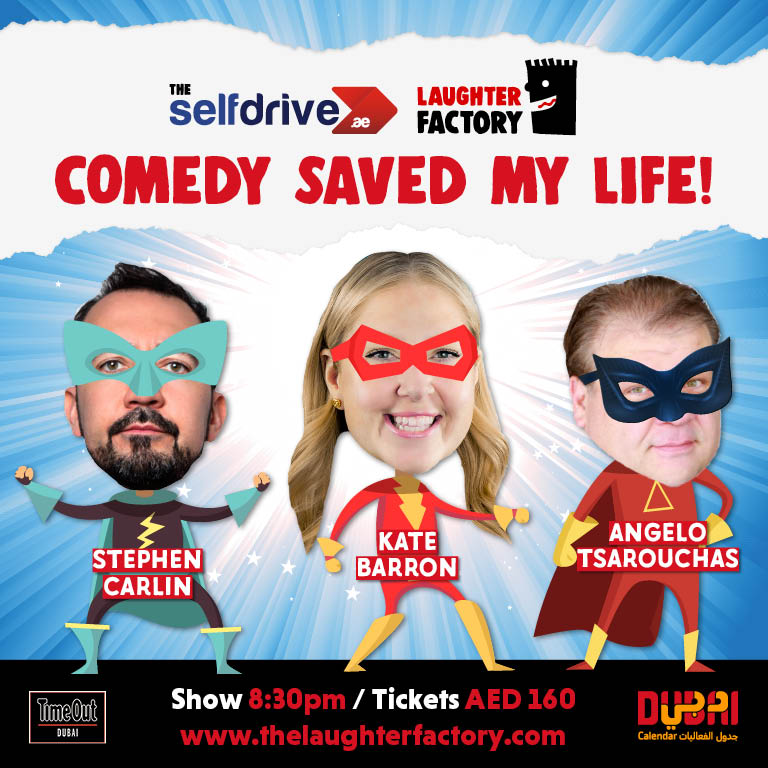 Laughter releases many of the same hormones as a good run, it reduces stress and can instantly improve our brain chemistry. A good chuckle also has the added benefits of no come down.

So, let’s get high! on our own supply!

Angelo Tsarouchas has got to be one of the most powerful ‘happiness pushers’ in the world. This Greek titan of a man is side- splittingly hilarious. Marlon Brando, Sylvester Stalone and a whole host of Hollywood A-list, love his humour. Russell Peters rarely travels without him to warm up the crowd. You won’t get funnier than this man!

Making her debut, award winning Canadian comedian, Kate Barron is the brutally-honest, unfiltered voice in your head. Her hilarious stories on dating and being happily childless are not for the faint of heart.

After a lifetime of being told she is too big, too loud and too vulgar, by everyone from strangers to teachers, she decided to step on stage and start wearing those labels as badges of honour. Kate doesn’t do self-deprecating. She’s that confident friend you wish you had on speed dial when you need to be pumped up.

Finally, BBC TV favourite Stephen Carlin, has just completed a sell out run of his latest show “Pickwickian” at the Edinburgh Fringe Festival. Described by the Guardian as “A cult favourite among fans of the sharper end of stand-up”

They reckon a sense on humour is like a muscle, it weakens without use. Come and join us, live a better more fulfilling life.

When & Where:
The Selfdrive Laughter Factory, October 2022 tour dates

Angelo has appeared on hit American TV shows such as “Mad Men”, “Sullivan and Son”, and “Blue Mountain State”.  This sought after comedian headlines comedy clubs and tours worldwide. He has been touring with Russell Peters World Tour, Vince Vaughn’s “Wild West Comedy Show” and is also featured on Just For Laughs. His Showtime special “Bigger is Better” received more than 14 million views and His portrayal of “Vinnie”, in the award winning indie comedy “Fred and Vinnie” received rave reviews. Most recently he just finished filming his latest one-hour comedy special to a sold out audience in Athens, Greece. Funny and approachable, this native Canadian currently lives in Los Angeles.

A hilarious and unfiltered take on sex, dating and relationships.

Canadian comedian, Kate Barron is the brutally honest, unfiltered voice in your head. Her hilarious stories on dating, sex, and being happily childless are not for the faint of heart.

Award winning Canadian comedian, Kate Barron is the brutally honest, unfiltered voice in your head. Kate fought (and partied) through her naive 20-something phase of trying to find herself, and came out the other side. Now in her 30s, she’s a fiercely loyal woman with a strong bull s#!t detector and the experience to back it up. After a lifetime of being told she is too big, too loud and too vulgar, by everyone from strangers to teachers, she decided to step on stage and start wearing those labels as badges of honour. Kate doesn’t do self-deprecating. She’s that confident friend you wish you had on speed dial when you need to be pumped up.