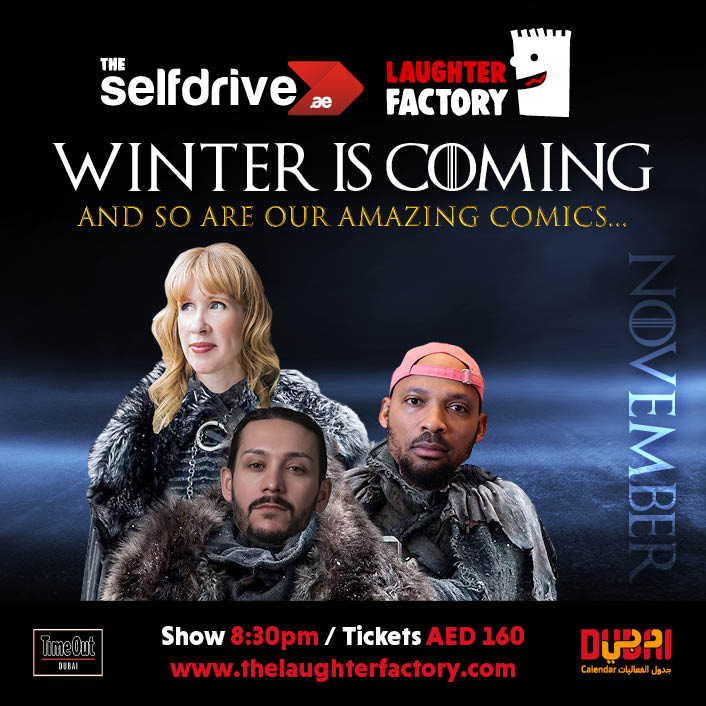 They say that humor is magical so prepare to be spellbound by this month’s offering of comedic wizardry and witchcraft. Weaving his comedy wand will be Edinburgh Festivals best-reviewed act, Darius Davies. Described as the most underrated comedian in the UK today, come and see him up close and personal, before he’s only playing arenas.

Making her Dubai debut, Carly Baker, can only be described as flat-out hilarious. This riotously funny woman is honest, energetic and charming with a just the right bit of filth mixed in.

Finally, Nico Yearwood, originally from the tropical island of Barbados, has been setting the global comedy circuit alight with his unique blend of Caribbean flavored comedy. Whether he is delivering hilarious stories about growing up in Barbados or his life in the UK, his laid-back style and charm immediately wins audiences over and leaves them wanting more.

So come, have the most fun that you can pack into two hours, while it’s still legal.

When & Where:
The Selfdrive Laughter Factory, November 2022 tour dates

Fresh of being the best reviewed comedian in Edinburgh 2021, Darius is coming to Dubai.  “Hilarious stuff, supercharged, and charismatic” (Chortle). Touring all around the world, co-host of the popular 3 Speech podcast, and creator of hit touring show Hate n Live – Darius is making waves at home and abroad with his fire-brand style of immersive, interactive comedy.

Chortle 🌟🌟🌟🌟 review: “It’s hilarious stuff, supercharged by precision timing and an impassioned, charismatic delivery that’s tempered by an engaging self-effacing streak. This is a rock-solid hour of constant laughs from a skilled pro.”

The Scotsman review 🌟🌟🌟🌟said: “it’s clear that he’s a thoughtful comic, the vivid imagery of his stories framed with social critique.”

On The Mic review 🌟🌟🌟🌟🌟 said: “Darius Davies is the most underrated comedian in the UK today. A major star, who you just haven’t heard of yet.”

The Student 🌟🌟🌟🌟🌟 review said: “Energetic, self-aware, and genuinely hilarious, this show is a must-watch if you have the chance.”

‘full of energy and blew the roof off the place, smiley and full of charm, which allows her to get away with some great filth.’ – Ha Ha Comedy

Carly Baker has been writing and performing comedy for over 16 years. Her self depreciating style is both sweet and raw. Honest, energetic and charming with a just the right bit of filth mixed in, she’s a favorite with both men and women and everything in between. Husbands have come and gone since Carly began stand-up and she will happily tell you about it all in gritty detail with a smile. Comedy is her passion and it translates on stage and in her love of the craft.

Lucky enough to start her career in 2005 at the Houston Laff Stop; where Bill Hicks got his start, she was soon performing in the Houston Comedy Festival and opening for heavy hitters like Darrell Hammond and Ralphie May. Tired of lots of sunshine she decided to pick up and move to Scotland and cut her chops on the UK comedy circuit. Welcomed at the famous Stand Comedy club in both Edinburgh and Glasgow she sharpened her skills and was soon sharing the stage with Frankie Boyle, Janey Godley, Susan Calman and Sarah Millican,  and more recently Bobby Mair and Sofie Hagen to name a few. From there Carly has travelled the globe making the funny all over Europe. After landing in Holland she quickly becoming a regular at The Comedy Café Amsterdam, also producing and MCing monthly shows in Delft, Leiden and Rotterdam. She calls Montreal home since 2021 where you can find her as a regular MC and performer at The Comedy Nest as well as support for Derek Seguin.

Scottish Comedian of the Year – Finalist – 2008

Originally from the tropical island of Barbados, Nico has been setting the comedy circuit alight with his unique blend of Caribbean flavoured comedy. Whether he is delivering hilarious stories about growing up in Barbados or his life in the UK, his laid back style and charm immediately win audiences over and leave them wanting more. His debut hour, Bajan in Britain, won high praise from his peers and industry alike, it was also featured in the Top 25 hilarious stand specials list by the Guardian newspaper.