The Selfdrive Laughter Factory’s ‘So far out, it’s in!’ tour 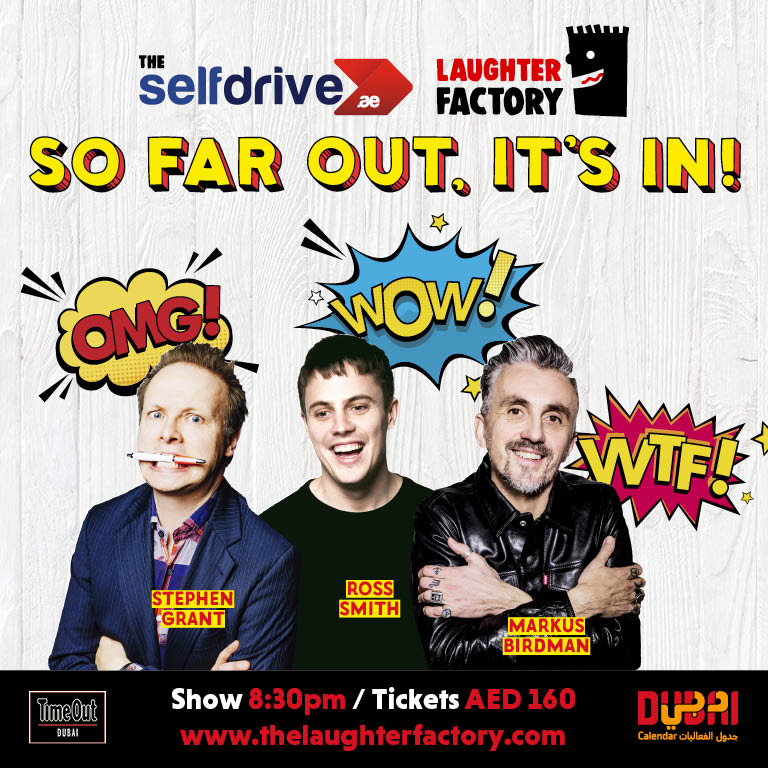 This September, the Selfdrive Laughter Factory will be bringing an absolute stunner of a tour to the Gulf.  This show will be a triumph and unafraid to push the limits of what society deems appropriate.

Markus Birdman has been described by the BBC as “The all-round package; witty, controversial, hip, topical and silly. A master of timing and physical comedy, he made me laugh so hard it hurt”

Next we have Selfdrive Laughter Factory legend, Stephen Grant “Right from the word go his audience were in fits of laughter as we were subjected to his relentless comedy. Comedy bordering on genius.” Three Weeks ★★★★★,

Finally Karl Pilkingtons choice of young up and coming acts, Ross Smith is definitely one to watch. This young act is devastatingly funny.

So grab your favorite people and maybe someone you don’t like to mix things up.

When & Where:
The Selfdrive Laughter Factory, September 2022 tour dates

Markus Birdman is one of British comedy’s most experienced and well-travelled performers. In demand all over the UK and abroad, Markus is a veteran of the Edinburgh Fringe with 11 solo shows to his credit and headliner status at all the top clubs, including The Comedy Store, The Komedia, Hot Water, The Stand and Soho Theatre. He’s performed at the Melbourne, Adelaide, and Perth Comedy Festivals and was nominated by the New Zealand Comedy Guild for Best International Guest. His international gig list includes Pakistan, Singapore, China, UAE,  Austria, Spain, Norway, Sweden, Finland and India to name a few. Which has been nice, considering no-one’s now going anywhere.

“Engagingly mixes the silly and the downright wrong.” Chortle

“A consummate comic…. energetic, engaging, thought-provoking and funny.”  The Stage

“Birdman’s Fringe show is a triumph. He isn’t afraid to push the limits of what society deems appropriate.” The Edinburgh Reporter

An experienced and versatile comedian, Markus is one of stand-up’s most well travelled comedians, much in demand in the UK and all over the world.

“Birdman is the all-round package; witty, controversial, hip, topical and silly. A master of timing and physical comedy, he made me laugh so hard it hurt”

“Birdman’s Fringe show is a triumph. He isn’t afraid to push the limits of what society deems appropriate. He has created an hour of thought-provoking, hilarious stand-up

Gigs for: Soho Theatre, The Comedy Store, Jongleurs, Highlight, Off the Kerb, Avalon, Last Laugh, The Stand, Laughterhouse, Comedy Company, Comedy Box, Up the Creek, Screaming Blue Murder, Just the Tonic and many others.

Since starting gigging in 2015, Ross Smith has taken the UK comedy circuit (and the internet) by storm. He’s a regular at some of UK’s biggest comedy clubs. His personable, relaxed style and contemporary material, underpinned by clever wordplay and rapier sharp comebacks, have made him one of the country’s most exciting emerging acts and quick-witted hosts.

In 2018, he made headlines around the world when he agreed to go on holiday with complete strangers, taking the place of another man called Ross Smith. His viral adventure and the aftermath is the subject of his debut Edinburgh show, I Am Ross Smith.

His second critically acclaimed show Crying/Shame (2019) boasted two of Dave’s Top Ten Jokes Of The Fringe alongside a plethora of fantastic reviews.

Ross has also featured in Karl Pilkington’s Sky One sitcom Sick Of It, Apple TV’s Slow Horses and will feature on screen on various projects in 2022

Ross Smith is a Charming but pedantic stand up and MC, specialising in deconstructing absurd ideas or magazine headlines, exploring self and unrelatable relatable material. originally from Northamptonshire but now living in London, Ross runs a successful semi-pro comedy night called SHOWBIZ BABY. In 2015 Ross was a semi finalist of so you think youre funny. in 2016 he MC’d a brighton fringe compilation show and also completed his first Edinburgh run with a show SPACE CAT PASTA BAKE.”. Ross is a resident MC at Londons notorious comedy night Comedy virgins at the Cavendish arms.

‘One of my favourite new acts, watch him now so you can be smug in 5 years time when he’s big’

‘hilarious and original- unlike this quote’

Bruce Dessau, Beyond the joke