The Selfdrive Laughter Factory’s ‘Starting The Year, In the Best Possible Taste!’ tour 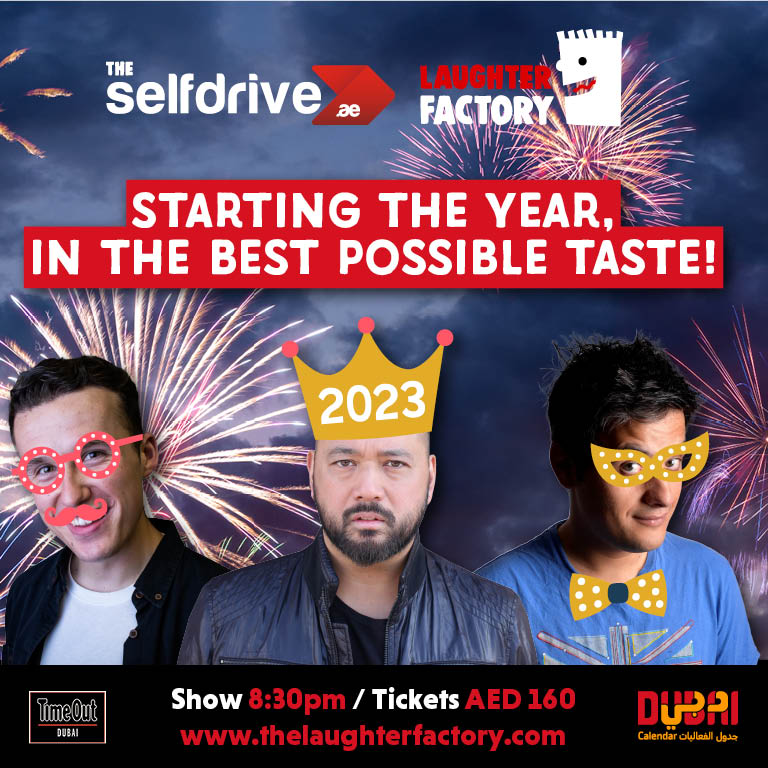 If you are only going to stick to one resolution in 2023 it has to be ‘Get more humor into your life!’ Sharing a good joke with other people is the perfect antidote to stress. It stops you taking others and more importantly yourself, too seriously.

The perfect way to keep your new, good-habit is to round up your favorite people and bring them to the best comedy night in the Middle-East.

To start 2023 in the ‘Best possible taste’, The Selfdrive Laughter Factory is flying in three of the best live stand up comedians currently touring the world.

Star of Kevin Harts ‘Lol’ show. Ron Josol is a regular headliner at the best comedy festival in the world, Montreal’s “Just for laughs’ and has gone on to be one of the most successful comics on the global comedy scene.

Next on stage, George Zach, was described as “Truly Terrific” by the Melbourne Herald (Australia)

This Greek born comic celebrates diversity. This allows him to connect with every type of audience imaginable. George has firmly established himself on the UK and Australian comedy circuits as a guaranteed crowd pleaser.

Finally, Harry Stachini is the comedian to watch in this new decade. Slowly but surely climbing up the ranks of the stand-up comedy world, Harry has established a reputation as an exciting young comedian with an impressive easy-going style. His warm and friendly stage presence comfortably leads us through hilarious and skillful storytelling, which is beyond his years.

So treat someone you care about to a ticket to the Selfdrive Laughter Factory. It has to be the best possible present you can buy them.

When & Where:
The Selfdrive Laughter Factory, January 2023 tour dates

Stachini is the comedian to watch in this new decade. Slowly but surely climbing up the ranks of the stand-up comedy world, Harry has established a reputation as an exciting young comedian with an impressive easy-going style. His warm and friendly stage presence comfortably leads us through hilarious and skilful storytelling which is beyond his years.

Harry feels like a mate as he shares his distinctive but familiar outlook on the world, his likeable character involves the audience, luring us into well-crafted scenarios, with expert delivery leaving us in stitches.

Harry performs at the UK’s finest comedy clubs and festivals having hosted the prestigious ‘Bound and Gagged’ ‘AAA’ Comedy Showcase at the Edinburgh Festival in 2017. He returned in 2019 to perform his debut solo show ‘Tigers Don’t Cry’ to sold-out audiences.

Whilst writing and performing stand up comedy, Harry has pushed himself off stage as well, displaying his ability as a skillful scriptwriter and actor. He is currently studying at the renowned ‘Act Up North’ drama school, refining his dramatic skills. He is also an enthusiastic filmmaker and has written and produced his own web series called ‘Howard’, released in 2017. It was later selected in 2018 for a UK national film festival!

Harry is a grafter and a genuinely passionate writer, he is continuously creating and coming up with new ideas – which he shares with collaborators with a view to somehow get them made with no money or time… At the moment, Harry is concentrating on filmed content; including comedic sketches and short films, as well as a series of intimate and personal documentaries with a crew of industry professionals.

“Harry is a must-see act with oodles of onstage charm and compelling, inventive storytelling”