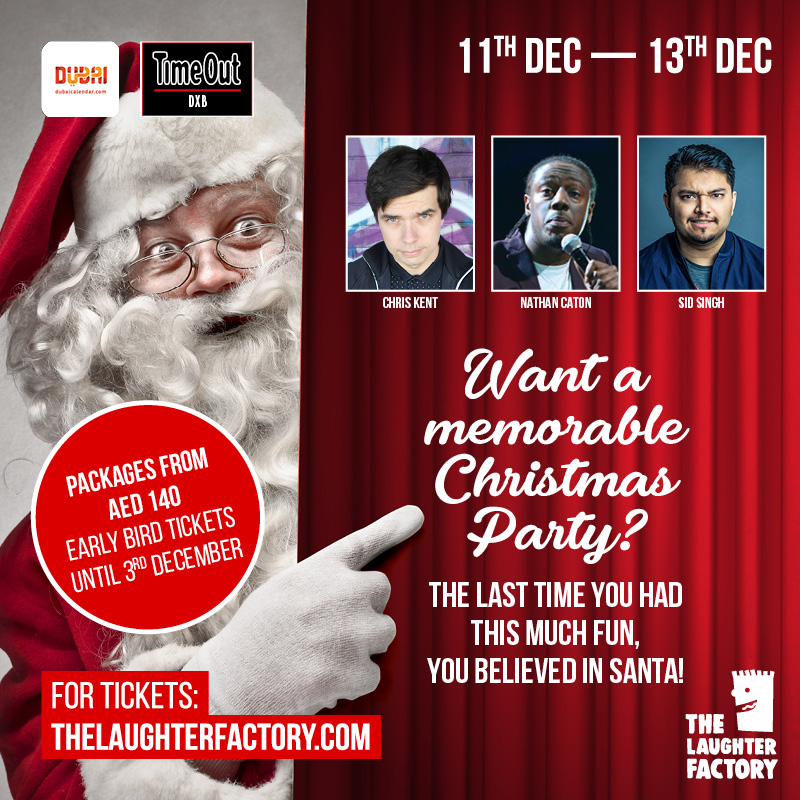 The last time you had this much fun, you believed in Santa!

The Laughter Factory guarantee’s the best Christmas party in town, we’ve put together a special package for group bookings in December. Combining belly laughs, food and drink, our festive packages are ideal for groups of old friends and office parties alike.

This fun night out, boasts three of the funniest people from shows such as’ Live At The Apollo’, ‘Mock the Week’ and Russell Howard’s Stand Up Central.

Described as ‘original and hilarious’ by ‘The Mirror’. Chris Kent has a unique style that has taken his deadpan act around the world.

Nathon Caton was hailed a shining light at the ‘Just for laughs’ festival in Monteal and last but by no means least Sid Singh is probably the most sought after act on the US and UK, Asian circuit. This diverse bill, will ensure everyone has something to laugh about.

Bookings are now open for our special festive party packages, which take place at

The Talk, the signature international eatery at Movenpick JBR, on Thursday 12th December

At The Talk Restaurant you and your guests can sit down to a five-star buffet, with free-flowing beverages, from 7pm, before the show starts at 9pm.

Early bird tickets are still available until and including Dec. 3rd Tuesday

‘He specialises in laidback, on-the-nose material, chopping down fools of all colours, both in day-to-day life and in the media’ – Guardian

Nathan Caton has been active on the UK comedy circuit since the tender age of 19. He excels in combining both personal, confessional material with up-to-date social and political anecdotes. This has won him numerous credits and plaudits over the years and has made him one of the hottest stars and established headliners on the UK circuit.

Since his beginnings he has both featured in and written for various television and radio shows on BBC, Channel 4, Sky TV and BBC Radio, performed five solo shows at the Edinburgh Fringe, appeared at the Just For Laughs Montreal festival and has wrapped up two UK nationwide solo tours.

Caton is no doubt a shining light in the comedy world and continues to wow audiences wherever he goes.

As seen on Russell Howard’s Stand Up Central.

A comedy natural’ – Beyond The Joke

Biog: ‘With his distinctive dry, laconic style of storytelling, Chris is one of the most exciting and original talents to emerge on the Irish comedy scene in recent years.’

Making his return to the Middle East, Chris Kent  is quickly garnering a name for himself on the UK circuit. Voted within the Top Five Irish Comedians (Hot Press, 2013), along with storming the Irish and UK festival scenes; Kent is effortlessly original – a truly natural born comedian. As seen on Russell Howard’s Stand Up Central.

Let me know if you need anything else,

Hot off the release of his first solo stand-up album, Amazing, Probably, Sid Singh returns to conquer the fringe with his completely unique focus on everything awkward.

Life is awkward in all of its interactions and search for identity. Sid Singh goes deeper and more personal, finding comedy in the uncomfortableness of being brown in America, the UK, and even the rest of the World; finding out you’re more racist than your white girlfriend; learning that you’re terrible at smoking cigarettes

OK, fine that all sounds great, but you know what’s way more important about Sid’s show?

It’s hilarious. H-i-l-a-r-i-o-u-s. All that other stuff is unhyphenated fluff.

Sid’s debut stand-up album, Amazing, Probably, is available on Stand Up Records, iTunes, and anywhere else albums are sold and is currently at number 3 on the iTunes US Comedy chart.

The Laughter Factory is the Middle East’s longest-running comedy night, proudly making the GCC laugh since 1997. Thanks to a longstanding partnership with the UK’s Comedy Store, The Laughter Factory hosts a fresh bill of three different professional comedians every month, many already familiar stars of the screen on hit UK TV shows.

The Laughter Factory’s commitment to comedy has been recognized by numerous publications, winning several accolades over its two-decade history, including a several ‘Best Comedy’ and the ‘Lifetime Achievement’ awards from Time Out Dubai and Abu Dhabi.